Mission accomplished: Rutter is a Marine and award-winning physics student 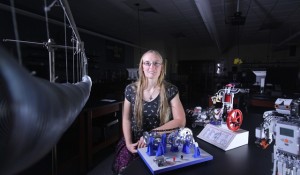 Barbara Rutter loves a challenge – not only did she excel in one of the most challenging degree programs at Southern Arkansas University, she did it while serving what she dubs as the most difficult branch of the United States military.

Rutter, of New Llano, La., graduated with honors this December from SAU’s Physics and Engineering program. She admitted that she could not complete her college journey in four years, but for good reason – she was on deployment for a year in 2011-12 as a Marine in Afghanistan.

Having to put a hold on her studies to serve her country neither made her lose what she had learned or her motivation to finish upon returning stateside. In fact, Rutter not only presented her research before she flew out, but she won first place for her work both at the Arkansas Academy of Science’s spring 2013 conference and at the IDeA Networks of Biomedical Research Excellence (INBRE) conference in the fall of 2013.

According to Dr. Abdel Bachri, SAU associate professor of physics, Rutter earned a travel scholarship from SAU to attend both conferences. At the INBRE conference at the University of Arkansas, she won first place among 24 entries. The award was based on her project’s technical merit and her ability to explain the research.

“Barbara is tough in class and tougher in the field,” said Bachri. “She works really hard. She is considering completing a Master’s in nuclear physics and work in a submarine as a nuclear engineer. If that’s what she wants, that’s what she’ll get. She’s a special student.”

Rutter said she was interested in physics and chemistry in high school, and that SAU offered her the best scholarship. She also knew she was going to serve in the Marines.

“My dad was in the Army, and I always knew I wanted to serve my country,” said Rutter. “I joined the Marine Corps because it is the most difficult branch of the military, and I like a challenge.”

After Rutter finished her freshman year at SAU, she went to boot camp from the Marine Reserve Training Center at Texarkana, Texas, to the base at Parris Island, South Carolina.

“It was 13 weeks of non-stop screaming. Getting screamed at 24/7. It’s the Marine Corps boot camp, what do you think?” Rutter said after being asked about boot camp.

She then went to Marine Combat Training at Camp Lejeune in North Carolina for a month. She said that was nothing like basic training. It was actually “fun” because she got to shoot “really big guns.”

She then went to Fort Leonard Wood in Missouri for her Military Occupational Specialty School to become a certified motor transport operator, or “Motor T.”

Back on campus in the fall of 2010, Rutter found out about an opportunity from Bachri about a summer research program at Berkeley National Lab in Berkeley, Calif. Bachri takes select physics students with him to perform research at the renowned lab each summer.

Rutter wanted desperately to go, but she had to change her reserve summer schedule for the internship. She said it was a nail-biter getting permission for the Berkeley experience from her reserve group.

While at Berkeley National Lab, Rutter worked with Acriel Goldsmith along with a faculty and student team from the Department of Energy. Goldsmith was building a prototype to detect neutrinoless double beta decay in xenon 136 gas, according to Rutter. Her goal was to further analyze the x-ray data they had collected.

Rutter was deployed in the fall of 2011 when her country called for her help oversees. She went to pre-deployment training in California before going to Camp Leatherneck in the Helmand Province, Afghanistan.

Back again to campus in 2012, Rutter was appreciative of all of her professors in the College of Science and Technology – each for different reasons.

“I enjoyed Dr. Hasan Shehada’s math classes because he is the most awesome math teacher ever. Dr. Sam Heintz gives you the real-world perspective. And I want to thank Dr. Bachri, of course, for the opportunity to go to Berkeley,” said Rutter.

SAU has been awarded for the past three years the designation of “Military Friendly School” by G.I.-Jobs, the premier magazine for military personnel transitioning into civilian life.

A tight-knit group of alumni has shown their enduring care and affection for a true icon of Southern Arkansas University — Dr. Margaret Downing, a

Why I Give – Linda Barnes

For Linda Harris Barnes, giving back to Southern Arkansas University is not only the right thing to do, but a way to help future students

SAU Volleyball gives the game back to the Magnolia community

With its intercollegiate fall season postponed and shifted into a shortened slate to be played out in the spring of 2021, the Southern Arkansas Women’s