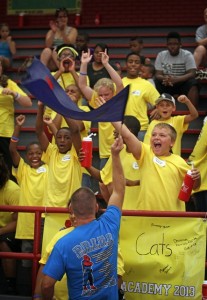 More than 125 smiling faces are clear proof of the positive effects
Mitchell’s program is having.

SAU alum Kristi Mitchell has more than a master’s degree to show for her hard work in graduate school, she has a successful youth mentoring program.

Mitchell, public information officer for the Texarkana Arkansas Police Department, planned the “Pride Academy” for her professional project while she was in SAU’s Master of Public Administration program. The second year of the weeklong Pride Academy wrapped up on August 9, 2013, and included approximately 125 fifth grade students and 50 peer leaders.

“We are trying to establish a unique bond between police officers and students here at College Hill Middle School. Often, when kids come into contact with police, it’s in a negative light,” said Mitchell. “We think that we can help change that attitude and help give these kids a responsible role model to look up to.”

Mitchell not only writes the grant proposals to fund Pride Academy each year, but also serves as the program coordinator. She said that since the program was a success last year, they decided to continue it on an annual basis and she feels like it will continue to get better every year.

“We are completing a longitudinal study of these kids to see if participation in the program reduces the crime rate in Texarkana over several years. Results from our first year, show a 56% decrease in behavior problems,” said Mitchell. “We are really excited about that number and we are looking forward to the future.” 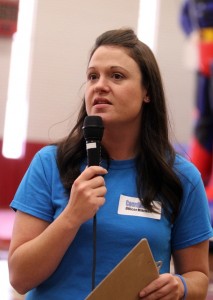 Mitchell was working at the T.A.P.D. while she completed SAU’s M.P.A. program. The M.P.A. program offers a mix of online, inperson, weekend intensive, and hybrid courses to accommodate students’ busy schedules. Classes are also offered in Texarkana.

Dr. Patrick Edgar of the SAU M.P.A. program said he knew that Mitchell would be an M.P.A. graduate who would make a difference.

“Kristi is another one of the M.P.A. success stories. I know that when she began the program, she wasn’t all that sure what she would do with it. By the time she was ready to develop her professional project, she had become a very different person,” said Edgar. “She learned the value of community development and a
core role played by the idea of social justice. I could not be prouder of Kristi.”

PrevPreviousMission accomplished: Rutter is a Marine and award-winning physics student
NextSAU hosts an open house at its new Texarkana locationNext