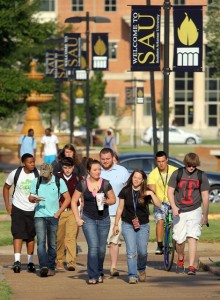 SAU not only had a record enrollment in the fall, but also had the highest number of beginning freshmen and the most students living on campus in the University’s history.

SAU had an overall record enrollment of 3,404 students, which is up 74 from last fall. The University’s previous enrollment record high was 3,382, set in 2011.

“I appreciate all the great work the SAU faculty, staff, and students have done to attract such a large freshman class,” said Dr. David Rankin, president of SAU. “Exciting new academic programs as well as additional student housing facilities have all contributed to a great fall total and on-campus enrollment.”

The beginning freshman class totaled 663, which was 20 higher than the previous record set in 2010 and up 61 from last fall.

With the addition of the 60-bed University Hall on campus and a well-branded “Complete College Experience” campaign, residence hall enrollment hit an all-time high of 1,452. This increase is up 72 from fall of 2012. The previous record was 1,440 in 2011.

SAU is also attracting high academic achievers. The SAU Honors College is 56 strong this fall. Freshman Honors students are entering the program with an average GPA of 3.78 and have an average ACT score of 27.11, according to Director of Honors College and Professor of Psychology at SAU, Dr. Ed Kardas.

Kardas said that he has plans for growth for the SAU Honors program with new 2+2 programs having been started with SAU Tech and the College of the Ouachitas. He said he also plans to expand soon to other two-year schools in the region.

SAU has a tradition of success as a regional, comprehensive four-year institution. Over the University’s more than 100 years, the student body has become internationally diverse. There are 33 countries represented on campus this fall with 99 international students.

Students are attracted to the family-like atmosphere, passionate professors, and the close-knit and active atmosphere on campus. The new programs, such as Wildlife Biology and the cutting-edge Computer Game and Animation Design, also have garnered SAU attention from potential students.

“I am truly excited to see that so many students agree that their lives will be enriched by choosing SAU for the complete college experience,” said Dr. Donna Allen, vice president for student affairs.

PrevPreviousA Blast from the Stater Past – March, 1964
NextCredit Card lives on through scholarshipNext