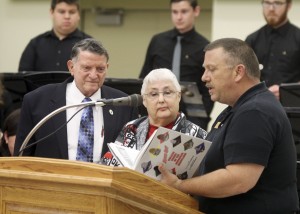 Thanks to a successful fundraising campaign that garnered more than $200,000 in donations, SAU dedicated the band facility in honor of SAU’s first band director, Richard Owen Oliver on April 18, 2015.

The dedication took place at the 14,377 square-foot band rehearsal facility that opened in 2008, which was named the Richard O. Oliver Band Hall.

Money raised from the campaign will fund an endowment to benefit the growing SAU Band program. The endowment will produce annual income for the continual updating of instrumentation, travel opportunities for various ensembles, and other needs of the band.

According to Josh Kee, assistant vice president for development, the campaign’s success is due to the leadership of Oliver’s daughter, Ann Oliver Bearden; her husband, Lawrence; the Foundation Board of Governors; and the generosity of many alumni and friends of SAU.

Considered by many as the “father” of the SAU Band program, Oliver established in 1948 the esteemed band program at SAU, then called Magnolia A&M College. He held that position until 1971 and developed one of the most well-respected band programs of the day. After stepping down as band director, he continued to
serve as head of the music department for a time, and then taught music classes until 1985. Oliver died on Jan. 26, 1986, at age 71. His wife, Eleanor, died in 1992.

Since the early days when Oliver was at the helm of the program, the SAU band has experienced significant growth. Today, the band consists of approximately 120 students per year, up from only 72 students in 2000. The band faculty includes Director of Bands J.P. Wilson, Assistant Director of Bands Sarah Mickey, Director of Percussion Michael Britt, and Professor of Trumpet and Horn Buddy Deese.

You can still be a part of this important campaign. For more information, visit the SAU Foundation website at www.SAUFoundation.org or call (870) 235-4321.

Geneva Scoggin ’55 recently moved to Farmersville, Texas. She is proud of her children and grandchildren and enjoys being active in their lives. After graduating

With the priority goal of breaking cycles of poverty for students, the SAU+VISTA program continues to make a difference in the lives of current and