The absent-minded maestro
was racing up New York’s
Seventh Avenue to a rehearsal,
when a stranger stopped him.
“Pardon me,” he said,
“can you tell me how to
get to Carnegie Hall?”
“Yes,” answered the maestro
breathlessly…
“Practice!” 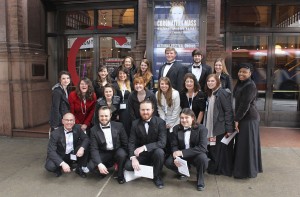 Members of SAU’s Heritage Singers and Chamber Singers choral ensembles, along with community and family members, returned to New York City in March 2015 to collaborate with five other choirs from across the U.S. to perform at the legendary Carnegie Hall.

“This was an ambitious undertaking, to say the very least, since SAU singers were already committed to a concert schedule at home,” said SAU Director of Choral
Activities David De Seguirant. “Some were even cast in principal roles for this spring’s production of ‘Beauty and the Beast.’”

Singers from SAU began their work to learn the 630 measure, five-movement mass during the summer and fall of 2014. When they arrived in New York, they were well-prepared for the vocal and focused demands of the full-ensemble rehearsals under Stroope. In a recent Manhattan Concert Productions (MCP) publication, Stroope noted, “This is the most wellprepared masterworks chorus I’ve ever conducted.”

The SAU contingent departed from the Bill and Hillary Clinton National Airport at 7 a.m. on Wednesday, March 18, bound for LaGuardia. After unpacking their luggage in their Westin Times Square rooms, participants were free to take in the sights and sounds of the city. Many students spent time at the Metropolitan Museum of Art, the Natural Museum of History, and the 9/11 Memorial, while others took in a Broadway show, an opera at the Met, or an off-Broadway play. Junior Business Administration and Management major Tracy Camp commented, “Everything like the city, the music, the people, and the atmosphere was different yet beautiful in its own little way.”

Of course, the central purpose for the time spent on campus with rehearsals and fundraisers was not to travel to New York to see the sights; it was to spend time under the instruction of Stroope in preparation for a discriminating Carnegie Hall audience.

“Never, in the seven times I’ve sung on the Stern Auditorium stage, has the performance drawn an immediate standing ovation—but this one did,” said De Seguirant.

When asked about her experience as a member of the residency ensemble, sophomore Political Science major Gabrielle Davis had this to say: “Another detail that I attained from Dr. Stroope’s instruction was to enjoy what I was doing. I was not on the stage singing because I had to but because I wanted to. This made me appreciate what I was really doing; and I believe that if everyone in the choir would have this same attitude it could improve our collective sound and relationships.” As if to echo this sentiment, senior BFA Musical Theatre major Hali Pinson commented, “Being a part of such a dedicated and talented choir that was created through MCP (Manhattan Concert Productions) opened my eyes to the possibilities available to me if I am brave enough to reach for them.”

De Seguirant said that he believes that everyone who participated in this experience learned important lessons that will be incorporated into the SAU Heritage and Chamber Singers’ rehearsals and performances.