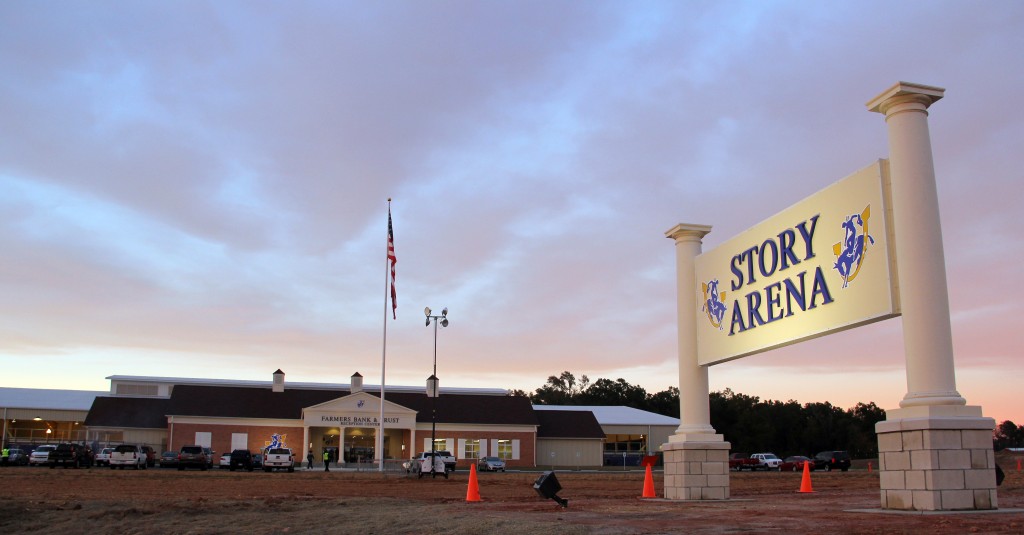 The grand entry highlighted the official Grand Opening of the $4.4 million SAU Story Arena on Nov. 6, 2014, on the opening night of the 2014 SAU Intercollegiate Rodeo.

“This SAU Rodeo is the heart of what this facility is all about. Story Arena will bring together the community as well as make a lasting impact in the life of youth and SAU students,” said Megan Maye McCurdy, arena director, SAU graduate, and former Mulerider mascot. 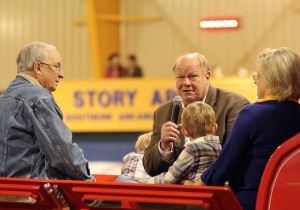 Therrel Story says a few words during the grand entry. He was joined in his horse-drawn wagon by his wife, Jan, and Bob and Molly Burns of Farmers Bank.

Construction of the Story Arena and Farmers Bank Reception Center would not have been possible without the generosity of a host of friends of SAU. Therrel and Jan Story of Magnolia gave $2.45 million, which is the largest gift in the history of SAU.

“I believe that is the number one reason the Storys gave such a generous gift. They believed in the potential of this facility, and it is my hope to help the Story Arena meet its full potential,” said McCurdy.

Farmers Bank and Trust, a supporter of SAU since the University’s beginning in 1909, also committed $250,000 to the reception facility at the arena. 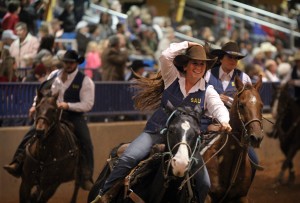 The Story Arena is a multipurpose, covered arena located on U.S. 82, west of the Mulerider Stables. The facility consists of a 78,000 square foot covered rodeo-style arena with a dirt floor and seating for approximately 1,400. There is also the adjacent 7,500 square foot Farmers Bank & Trust Reception Center that sits in front of the arena. The reception area includes a ticket booth, concession stand, an office, meeting and conference room, men’s and women’s restrooms, and a grilling porch.

According to McCurdy, the arena has been doing very well thus far and the fall schedule has almost been completely full on the weekends between various rodeo events and private parties. Cost for booking the reception area and the arena are very reasonable. The conference center starts at $35/hour, and the price decreases the longer it is rented. Starting cost for renting the arena is $400, and additional fees may apply depending on needed amenities.

Besides the SAU Rodeo, Story Arena is excited that a professional rodeo event through PRCA has been booked at the arena for March.

“We believe this PRCA event will be something that will put Story Arena on the map,” said McCurdy.