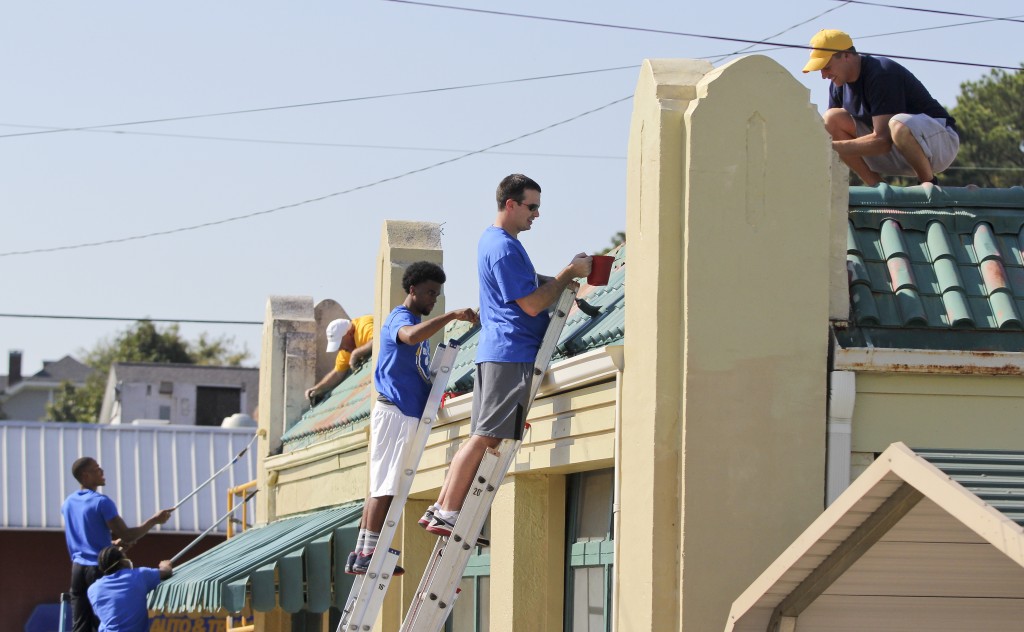 It began small – a husband and wife driving down Main Street in Magnolia wondering how much better their town would look with a little tender loving care. But on Saturday, Oct. 25, after months of planning and organizing, the small idea blossomed into a “Big Splash,” bringing a sense of renewal and community pride to areas that had been neglected for years. 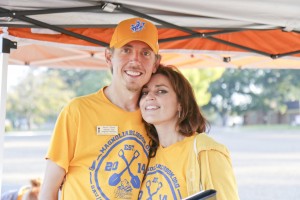 Around 500 community members joined forces for “Big Splash Saturday,” the kick-off event for a new community organization known as Making Magnolia Blossom. The group was founded by Aaron Street, assistant dean for integrated marketing and media relations at Southern Arkansas University, along with his wife, Dr. Viktoriya Street, associate professor of biology. The organizing committee grew to include many other faculty, staff, and students from the University.

Since the Big Splash, an additional $10,000 has been given by an anonymous donor who wants to see the improvements continue, and they did not have to wait long. A follow-up event was held on December 6, and volunteers completed the painting of two Main Street businesses.

Also on December 6, MMB sponsored its first fundraising event – the Ugly Sweater 5K. This unique event was held at the SAU track and community walking trail.

The Making Magnolia Blossom committee at SAU is in the process of filing paperwork to become an official 501(c)(3) organization. They will also be working to establish a permanent governing board.

Aaron Street was very happy with the results of the group’s first efforts. 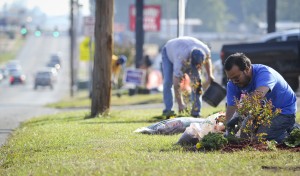 “It was a thrill for those of us at SAU who planned the Big Splash to see how enthused the business owners and community members were with all of the projects being done and also with how energized all of the volunteers were to get their hands dirty to help clean our community,” he said. “We have been called the ‘Dream Team’ because we think big, but the support this project has gotten has surpassed our wildest dreams.”

The diversity among volunteers solidified the support given to the group. Volunteers included local junior high and high school students, city officials, community members, business teams, and even those on opposing sides of political issues.

“It was like coming out of a hurricane,” Magnolia Mayor Parnell Vann said as he described the nearly 500 community members working to clean up Main Street. “You had democrats and republicans, young and old. This event brought people out to work together as a community. This was definitely a home run.”

Dozens of improvements were made all across the 1.8 mile stretch of Main Street, and the before and after comparisons are amazing to see. Entering the city from the east, drivers were once welcomed by an overgrown lot at the intersection of U.S. highways 82 and 79. A sign intended to greet visitors had become surrounded by an overgrown drainage ditch and enclosed by a fence that was overrun with a dense layer of weeds and vines. That area has now been transformed as trees have been removed, weeds have been mown, and the fence line has been completely cleared. 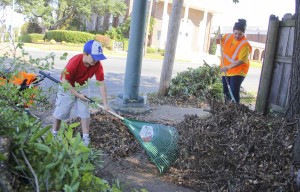 Up and down Main Street, lots that have been neglected for decades have been cleared, sidewalks have been edged, and curbs have been given a fresh coat of paint. Several empty sign posts were cut down to provide a cleaner line of site for those who drive down the city’s main thoroughfare. Trees were trimmed, and ditches were burned off, cleaning up overgrowth and years of neglect. Volunteers filled dozens of bags with litter that had collected in ditches and on the sides of the street. Those bags were then hauled away by yet another group of volunteers.

From Dudney Street to the Columbia County Courthouse Square, small plots of patterned landscaping have been added. The plots include crepe myrtle trees that will provide bright, colorful blooms during summer months.

“Support from SAU and from the community was amazing,” said Deana Taylor, SAU’s community involvement coordinator. “It was exciting to watch the number of volunteers rise, and it was gratifying to know that what started as an idea by a small group could grow into an event that involved such a wide variety of people all focused on improving the community in which we live.”