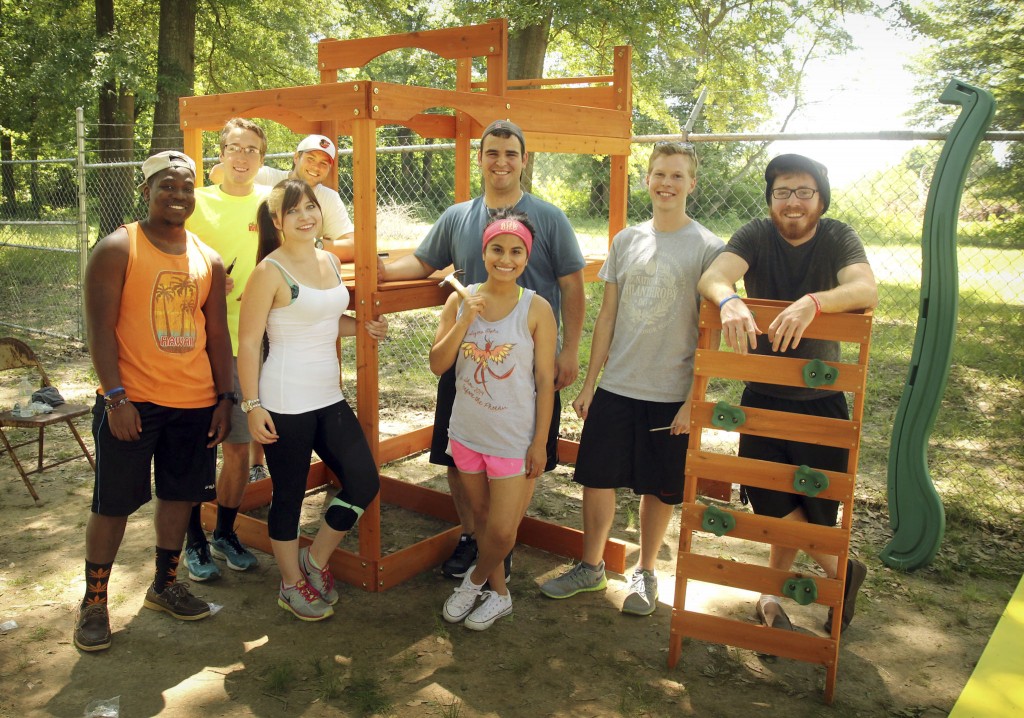 Magnolia’s homeless shelter residents have benefitted with additions to improve the quality of life for its youth and adult residents alike thanks to a group of passionate SAU business students.

Through the Enactus organization in SAU’s Rankin College of Business (RCB), students raised money to purchase a complete desktop computer, a new playground for the children, and money towards a new ice machine for the Southern Christian Mission homeless shelter at 515 West Monroe Street in Magnolia.

“I am just overwhelmed,” said Ruthie Sharp, SCM director. “I told them our greatest needs and they blew my mind by doing all the things they set out to do.”

The initial phase of the Enactus project was purchasing and installing a computer, printer, scanner and fax machine. RCB students even established a weekly training schedule that spanned throughout the spring semester to teach residents how to use the system.

Before having this technology on the premises, Sharp said the residents had to find a way to make it to the Columbia County Library approximately two miles away to do job searches, practice typing skills for the WAGE program, or for the youth to research for school projects.

“This has been one of the most rewarding things I’ve been a part of since I came to SAU,” said Robby Higginbotham, who completed his marketing degree and graduated at the spring commencement. “Not only was it a great community-based and impactful project, but it offered us real-world experience.”

He said the day they were visiting with Sharp about the needs of the shelter, workers were removing the old playground equipment from the back yard. When funds were left over from the computer equipment, they knew how they were going to use them.

“The kids were really excited when they found out we were helping with new playground equipment. Ms. Sharp even told us that one of the children raised money to contribute,” said Higginbotham.

Another need arose at the shelter during the semester as the facility’s ice machine broke. The students responded and immediately went to work helping to raise funds for a much needed replacement.

The RCB students earned funding through a $1,500 successful grant proposal to Walmart’s Women’s Economic Empowerment Project Partnership through Enactus. They will also provide a final impact report to the Walmart Foundation.

Approximately $500 was also raised through a partnership with the Magnolia Dominos, where a collection jar produced higher than expected results.

Higginbotham said that although he and other Enactus members are graduating, the group was so moved about their work at the shelter that they hope to continue their support with projects in the next academic year.

Formerly known as SIFE, Enactus is an international nonprofit organization that brings together student, academic and business leaders who are committed to using the power of entrepreneurial action to improve the quality of life and standard of living for people in need. SAU’s Enactus group has an astounding track record through programs such as Students Acquiring Knowledge through Entrepreneurship (SAKE); Service Learning Initiative for Community Enrichment (SLICE), which raises awareness about the proper disposal of electronic waste; and We Heart Magnolia, in which they have partnered with Living Water Women’s Shelter to complete massive renovations.