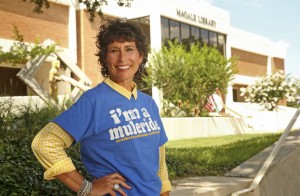 Graduateprograms.com has a mission to provide helpful information to prospective graduate students through peer-written ratings and reviews. These program rankings cover a period from Sept. 1, 2012, to March 31, 2015. Rankings cover a variety of student topics, such as academic competitiveness, career support, financial aid and quality of network.

Loyd, a 33-year teaching veteran from Vilonia, radiates happiness and possesses a great vigor for life. She completed her LMIS master’s degree at SAU this summer, and graduated August 7.

She swears she is not getting paid to represent SAU or recruit for the University, but she literally cannot think of a negative comment about SAU or Magnolia. She can easily run down a long list of praises for practically everyone she has met on campus. Her first SAU contact was with Peggy Walters, who answered the phone when Loyd called for information about the LMIS program.

“She was honestly the sweetest, kindest, and the most helpful, encouraging, and genuine college professor to whom I have ever spoken” said Loyd. “Forty-five minutes later, I hung up the phone, called my husband, and told him I was a Mulerider!”

Along with being impressed with Walters, she said SAU’s library media program was appealing because some of the classes are online while others are available on campus during summer in what is referred to as an “intensive week of study.” The coursework is current, handson and extremely relevant, according to Loyd. She said that the networking opportunities this format offers are great, too, and she said a professional learning community is created in the class.

Loyd spent three weeks in classwork at SAU in summer 2014, and she loved everything about it. She stayed in Fincher Hall with her fellow students, and woke up early every morning to run the community walking trail that winds through SAU’s beautiful campus and farm. Much of her time was spent in Magale Library, where she credits the instructors and librarians with being very helpful and kind. She takes short shopping trips to Magnolia’s downtown merchants during class breaks and at lunch, and is warmed by the friendly nature of the people she meets.

Since her SAU experience began, she has started telling every student she can at her school, to consider becoming a Mulerider. She has come in contact with countless students in her various roles throughout her career in Conway and Vilonia schools. Most recently, she moved to the library at Vilonia Freshman Academy to become the media specialist.

“I am thrilled that I made the change to the media center and I have some great ideas that I am looking forward to seeing become a reality,” she said. Her enthusiasm has already been recognized in her new role, as she earned the “Soaring with Excellence” outstanding teacher award for her efforts in the library
last year.

She is married to Max Loyd, and they have one daughter, Rose, and five grandchildren. She gives credit for her success in the LMIS program to her supportive family and great group of co-workers and friends. In her free time, she enjoys reading, visiting flea markets and fixing up her fabulous finds, camping, horseback riding, rodeoing, hunting, cooking, and borrowing ideas from Pinterest. She has recently begun running and enjoys participating in 5K’s. Most of these things she does while in the company of her “grands,” as she likes to call them. She is also a proud 10-year breast cancer survivor.