A year after the kick-off of the “Raise the Roof ” pavilion initiative, the SAU Alumni Relations Board has decided to make it a three-year capital campaign to allow more time for funding a structure that will better meet the present and future needs of SAU, the alumni, and the Magnolia community.

The vote came under the direction of new Alumni Board President David Butler at the March 4, 2015, meeting. It was noted that SAU has gone through many changes, one being the record enrollment growth that will equate to more alumni in the years to come. Also highlighted was the need in the area for such a pavilion. Columbia County does not have a facility of this kind.

The “Lusby Alumni Hospitality Pavilion” will be a multipurpose structure designed to build relationships among the Mulerider family (SAU students, alumni, family, and friends) and the Columbia County community. It will host a variety of events, which will of course include the popular “Mulegating.”

“We are well on our way to making this dream a reality,” said Ceil Bridges, director of Alumni Relations. “More than $200,000 has been raised or pledged so far. The Lusby Alumni Hospitality Pavilion is already being instrumental in connecting alumni to SAU, and we hope their support will continue to help the future of SAU, a goal of President Trey Berry.” 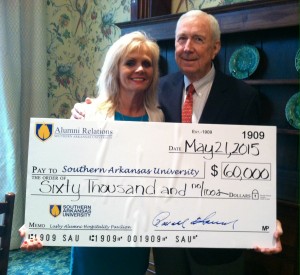 SAU alumnus, Laura (Lusby) Winning and her husband Kyle, of Little Rock, donated for naming rights to the pavilion. Ron Harrell and his children chose to get the naming rights for the pavilion courtyard in memory of his late wife, Ann (Furr) Harrell. Bill Anderson was the first to start at the $5,000 donor level. One other opportunity for naming rights, the catering kitchen, remains.

The Donor Wall will list donors who give gifts toward the pavilion of $5,000 and more. A matching grant is also available for gifts other than those for naming
rights. Other major gifts have come from the following: Magnolia Advertising and Promotion Commission; Phi Lambda Chi; Murphy Oil; Charlotte Baine; Martha and Louis Blanchard; Betty Stringfellow and her late husband, Bill; Dr. Donna Allen; Charles and Kerri Peden; Sally Goldberg; Buddy and
Jeanne Franks; and David and Vicki Butler.

“I really want to see the ground breaking,” said Gerry Lusby recently. “I remember how the Bell Tower changed the campus, and now it is difficult to imagine SAU without it. The pavilion will not only be a symbol, it will be a place to gather and make new memories.”