Muleriders strike it rich in Las Vegas with Arkansas BBQ 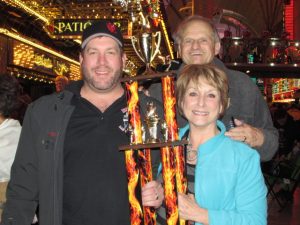 Childhood memories are often instilled in your senses. Good south Arkansas barbecue is one of those tastes a person never forgets. In my case, neighbor Noel Kinney Calaway in El Dorado always hosted a Fourth of July barbecue at his farm. He would dig pits, line them with hickory wood burned into coals, and slowly cook pork, goat and beef in these covered pits. The flavor was something to die for. I never experienced this again until my wife, Skeet, and I visited Rollin Smoke Barbecue in Las Vegas, owned by Muleriders Lee Holland, John “Trey” Holland, and Dusty Ardoin.

Lee Holland noted in a Fox News report, “We want to put some South in their mouth!” The business began with Lee and Trey selling their creations on the side of the road. Pitmaster Dusty Ardoin noted they sold one sandwich the first day and then several the following days until business exploded. Lee indicated their Southern hospitality and home-cooked menu of ribs, chicken, and sides caught on, and it didn’t take long before they outgrew their meals-on-wheels business. They simply needed more space.

They opened their first restaurant on South Highland Drive in Las Vegas. Soon hundreds of people were lining up to sample the creative barbecue cuisine. According to Dusty, the menu has undergone evolution and tweaking over time. One of my favorite dishes is the signature Smoked Meat Loaf, which they say took two years to perfect. This mouthwatering loaf is covered with crispy onion strings and sits on a bed of seasoned mash potatoes.

Another creation of Trey’s is the mile-high Outlaw Burger. The secret is a half-pound of brisket and a half-pound of hamburger laden with savory spices, onions, bell peppers, and slaw, all of which is topped with those delicious onion strings.

With dishes like this, along with traditional ribs, brisket, and southern sides like collards, the best ever potato salad, it was only a matter of time before the restaurant attracted national attention. Rollin Smoke has been featured on Animal Planet’s “Tanked,” the Travel Channel’s “Barbecue Paradise,” National Geographic’s “None of the Above,” and on Fox News. While Skeet and I were there, the group was filming for additional exposure.

The establishment has been gathering awards and other praise as well. In 2013, they were named one of the “Top 20 Barbeque Restaurants in America.”  Recently, at a competition on Fremont in Las Vegas, they won a trophy for “Best Dam Barbecue” in Las Vegas.

The future is bright for Rollin Smoke. The restaurant garnered the attention of Rick Harrison of Rick Harrison’s Gold & Silver Pawn. When Rick opened a shopping center next to the pawn shop, Rollin Smoke was incorporated into the center in a restaurant and a bar. We met Rick and Trey for a post BBQ competition party. I had an open-face brisket sandwich with jalapeno coleslaw that could have, and did, feed five people.

Cashing in on your dreams is a characteristic of many Mulerider students and a trait of the University. A degree from our University is more than a mule skin, it’s a recipe for success later in life.