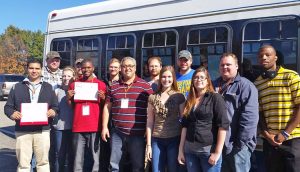 At the 2015 conference, held November 6-7 in Fayetteville, there were 170 total oral and poster presentations from various institutions across Arkansas and other neighboring states. Only a handful claimed awards, and three of the winners were from SAU, according to Dr. Abdel Bachri, chair of the department of Engineering and Engineering-Physics

Cullen Shaffer, a senior Biology student from Crossett delivered an oral presentation on “Radiation and Microgravity Induced Genomic Instability.” Shaffer and Webb are currently funded to work with Bachri on an NIH Research Development Grant totaling $265,000. They are exploring the effect of space radiation in a near-zero gravity environment on chromosome mutations, which are associated with a range of pathophysiological conditions such as cancer and neurological and vascular disorders. Romo was funded by an AR Space Grant from NASA. All students completed summer research working side-by-side with Bachri at the Division of Radiation Health of UAMS, along with Dr. Rupak Pathak and other radiation biology research scientists at UAMS.

Previous INBRE award winners from SAU include Joshua Grant, Barbara Rutter, Kahli Remy, Martin Hawron and Jeremy Dunklin, all of whom are making excellent progress in their Ph.D. studies at various institutions.

SAU Engineering has had strong industry support and has a good reputation, according to Bachri, which translates into our ability to place each student in industry internships or lab-driven research experience.

While four students were presenting at this conference, 14 total SAU students took part in this traveling experience. The group spent almost two days visiting with various research faculty members from physics to mechanical and biomedical engineering. The trip was funded partly by the SAU Foundation via the Amfuel Founders endowment, the University of Arkansas and AR INBRE.