The SAU Athletic Department inducted its 2015 Hall of Fame induction class at a ceremony on Friday, October 9. A public induction was held at halftime of the October 10 football game against Oklahoma Baptist.

The 2015 SAU Sports Hall of Fame class is comprised of eight former SAU student-athlete standouts and one coach. 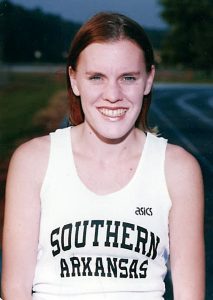 Beth Augenstein Yanda was a three-year letter-winner in track and a four-year letter-winner in cross country while at Southern Arkansas. In her senior year of 2001-02, Augenstein was named the captain of the cross country team and later was honored as that year’s Female Auburn Smith Award winner. She was a four-time All-GSC runner earning Second-Team honors each year. Additionally, Augenstein would set school records for the 5K and 6K cross country races. She also set track program records in the 800-meter (2:25.97 | 1999), the 1500-meter (5:01.89 | 2001) and the 3000-meter (11:37.60 | 1999) events. 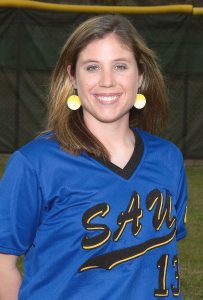 Whitney Brannon Alderman was a standout offensive player during her entire four-year softball career at SAU. An All-GSC selection each year, Brannon earned First-Team honors in 2004, 2006, and 2007 while being named to the Second-Team in 2005. She was named GSC West Division Co-Freshman of the Year. Her .355 batting average and 13 doubles were single-season records. As a senior in 2007, Brannon would tie a GSC record for consecutive games with a hit when she hit in 25 straight from Feb. 11 to April 2. Academically, Brannon was a two-time GSC All-Academic Team honoree and was an ESPN The Magazine Academic All-District VI First-Team selection as a senior. She also was honored as SAU’s Female Auburn Smith Award winner, as well as being a GSC Commissioner’s Trophy Top Ten honoree. 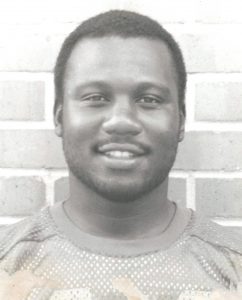 Doug Carter was an outstanding defensive nose guard at Southern Arkansas during the early 1980s. As a sophomore in 1980, Carter was a unanimous All-AIC defensive lineman and went on to earn NAIA All-District 17 and NAIA All-America Honorable Mention plaudits that year as well. He repeated all three honors as a junior in 1981 and as a senior in 1982. 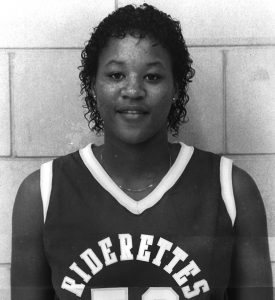 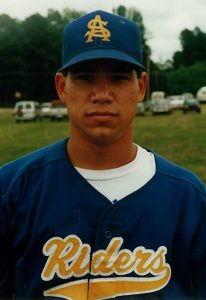 Richie Kimm was a member of the SAU baseball team for two years in 1993 and 1994. An All-AIC and NAIA All-District 17 infielder both years, Kimm would have his best year in his final season for the Muleriders as he was named as the NAIA Southwest Region MVP as well as being named as a NAIA All-America Second-Teamer. Kimm was a .422 (144-for-341) hitter with 18 doubles, six triples, 11 homeruns, 75 RBIs and 88 stolen bases. His career batting average currently ranks second all-time at SAU. 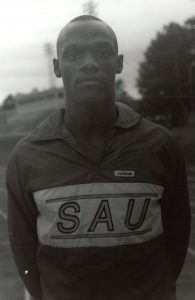 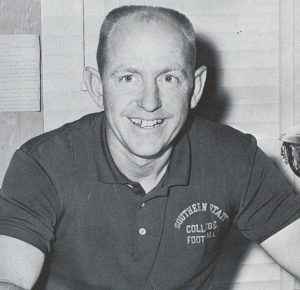 Bob “Cotton” Staten played baseball and basketball at Southern State College from 1953-1957. In basketball, Cotton lettered his final three years and helped the Muleriders win the NAIA District 17 Championship in 1957. In baseball, Cotton would be the epitome of a utility player as he played second base, shortstop, third base, and even spent time behind the plate as a catcher. In 1954, Cotton helped the Muleriders capture an AIC Championship outright and then in 1956, the Muleriders would share the AIC crown with Ozarks. After his playing career was over, Cotton returned to Southern State in the fall of 1967 and served as the head baseball coach, while also assisting with the Mulerider basketball and football programs. In his first year as a coach in 1967-68, Cotton helped the school claim the AIC All-Sports Trophy after the football team posted a 5-3-1 record, basketball an 18-8 mark, and baseball a 16-10 record and an AIC Championship, the first since Cotton’s playing days. For his efforts as head baseball coach in 1968, Cotton was named NAIA District 17 and NAIA Area V Coach of the Year. 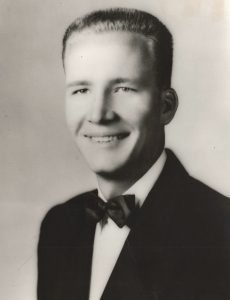 Calvin Thomas played basketball from 1949-53 at Southern State College. Over his four-year playing career that totaled 82 games, Thomas scored 1,647 points to average just over 20 points per game (20.1 ppg). His career points per game ranks second all-time and his career point total is third all-time. Thomas, who would later become known for his hook shot, busted onto the scene by scoring 619 points over a 23-game schedule his freshman year, earning a point-per-game average that still stands as a single-season program record. After a promising sophomore season was cut short after seven games, Thomas came back as a junior in 1951-52 and set two single-game records that still stand today: Points (44) and Field Goals Made (19). As a senior in 1952-53, Thomas would cap his career with All-AIC honors. 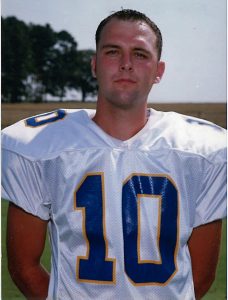 Jason Williams was an outstanding and record-breaking place kicker for the Muleriders in the late 1990s and into 2000. An American Football Coaches Association (AFCA) All-America First-Team kicker in 1998, Williams would set numerous kicking records that year including the Most Field Goals in a Season with 20, and the Most Field Goals in a Game with four (4) against Valdosta State. That same year, Williams set a record for the Most Consecutive Field Goals in a Season with 15, the Most Points by Kicking for a Season with 96, and the Most Points by Kicking in a Game with 16 against Valdosta State and West Alabama. Additionally, Williams set a record for the Longest Field Goal in SAU history with a 57-yard kick against Valdosta State. In his final season in 2000, Williams set two new single-game records for Extra Points with 11 and Consecutive Extra Points with 9, with both marks coming in an 86-27 drubbing of Henderson State. In addition to the single-game records, Williams cemented four career kicking records for Extra Points (106), Consecutive Extra Points (57), Field Goals Made (40), and Points Scored by Kicking (226). A two-time All-GSC kicker, Williams was named to the GSC All-Decade Team for the 1990s.