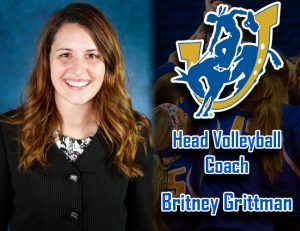 The SAU Athletic Department and Director of Athletics Steve Browning have announced the promotion of Britney Grittman to the role of Head Volleyball Coach. Grittman, who recently served the past two seasons as a graduate assistant coach in the Lady Mulerider volleyball program, will begin her head coaching responsibilities effective immediately.

“We are very excited to introduce Coach Grittman as the new head volleyball coach at Southern Arkansas,” said Browning. “Being able to get to know and observe Britney over the past two years as she has served as a GA for our volleyball program, it was evident to us, through her passion for the game of volleyball and second-to-none work ethic, that she is ready to step into the role of head coach.”

In her time as a GA, Grittman worked extensively with the Lady Muleriders’ front attack line as well as assisting in the team’s overall blocking and setting efforts. Over those two seasons, the Lady Muleriders racked up 3,144 kills, 384 blocks, and 2,962 assists. This past season, SAU ranked second in the Great American Conference in kills and assists.

Additionally, over her two seasons as a GA at SAU, Grittman helped lead the Lady Muleriders to their first-ever GAC Championship game appearance and mentored four All-GAC honorees, which included a pair of GAC Newcomers of the Year and two All-GAC First-Team players.

“I am very excited about being given the opportunity to lead the Lady Mulerider volleyball program and would like to thank Dr. Berry, Coach Browning, and the entire hiring committee for their time and consideration of me,” exclaimed Grittman. “I am really looking forward to building upon the recent successes of the SAU volleyball program and am eager to begin working with our returners this spring while also welcoming incoming recruits this fall.”

Grittman, a native of Oak Grove, Missouri, played collegiately at MidAmerica Nazarene. She was a part of three consecutive conference tournament championships from 2011-2013 and she and her teammates earned a pair of regular season championships in 2012 and 2013. With those championships in hand, Grittman played in the NAIA National Tournament three times.

Off the court, Grittman was named to MidAmerica Nazarene’s President’s List while also being named a NAIA Champion of Character nominee during her career.

After earning a Bachelor of Arts degree in Corporate Communications with a minor in Marketing from MidAmerica Nazarene in the spring of 2014, Grittman is expected to complete her Master of Science degree in Kinesiology-Coaching from SAU in the summer of 2016.