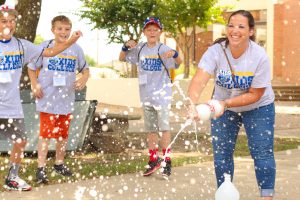 For the second year in a row, summer camps headlined by the Mulerider Kids College injected life into SAU’s hibernating campus and left hundreds of youth with lasting memories.

The second annual Mulerider Kids College (MKC) ended at noon on June 30 with a packed house in Grand Hall as nearly a hundred more participants than the 2015 inaugural MKC wrapped up four days of learning and fun.

A total of 250 children from grades 1-6 traversed SAU’s campus to experience a total of 23 unique classes. MKC organizer Jana Walker, nicknamed Kids College Principal by the students, announced at the ceremony that the dates for the 2017 Mulerider Kids College will be June 26-29 and that registration will open sometime in March.

“I want to come back (next year) because it’s really fun and I like it here. The teachers are nice, other than regular school,” said MKC student Conner Ludwig in a video played at the closing ceremony, which created a wave of laughter through the crowd.

Walmart was the primary sponsor for the second year in a row, donating $15,000 for this camp. When 51 student scholarship applications were submitted, the Albemarle Foundation stepped up and offered $750. Also, four individuals gave funds to support MKC scholarships.

“We toured the Mulerider Kids College with representatives from Walmart and Albemarle and witnessed the creativity, ingenuity and enthusiasm of our Kids College students. It was really outstanding and we are proud of all of them,” said Dr. Donna Allen, SAU vice president for student affairs.

More than 200 photos are posted at www.SAUmag.edu/MKCpics and the highlight video is available at www.youtube.com/saumag. Stay up to date on MKC at their Facebook page – www.facebook.com/MuleriderKidsCollege.

The second-annual Engineering Summer Camp attracted 18 participants from grades 8-12. They completed engineering designs using SolidWorks, had a Mindstorms robot competition, used 3-D printers, learned radiation and nuclear physics, built TETRIX robots, and completed Arduino projects. Students also interacted with mechanical and civil engineers to start to think about their own future careers in the field. Plans are already in the works for next year’s camp.

The second-annual Game Development Summer Camp hosted 15 students from grades 10-12. These blossoming artists created concept art and table-top games, and they learned scripting using Unity game engine software. They even held a “game jam” and created three working table-top games in a four-hour period. Campers were impressed with the keynote speaker, Aaron Quidley of Moonbot Interactive, who spoke to the group Monday morning. According to camp organizer Rhaelene Lowther of SAU’s Game Development program, the camp focused on fostering cooperation through group activities and learning. She said it really paid off as they worked together to learn key skills of game development with collaborative creation across disciplines.

Work has begun to plan a third-annual camp for this program as well, and tentative dates are July 24-28, 2017.