SAU and Mulerider Athletics have recently completed several facility enhancement projects that are directly impacting all 12 of SAU’s intercollegiate programs. From minor upgrades to bring about a fresh look to the facilities, to full-scale construction projects bringing new state-of-the art complexes to campus, to utilizing technology that enables SAU’s great and storied athletics history to be presented in a convenient and modern way, Mulerider Athletics is continuing towards its goal of being one of the premier athletic departments in the Great American Conference, the region, and NCAA Division II. 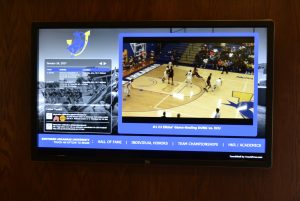 Many of SAU’s great and loyal fans remember a time when the hallways and lobby of the W.T. Watson Center were filled to near capacity with 8×10 head shots of numerous former great Muleriders! It served as a place of reflection for many as they recounted the achievements of those players and coaches. Coaches commonly made it a stop on their recruiting tours around campus with prospective athletes, challenging them to “make the wall” when they became Muleriders!
However, after years of wear on some of the pictures, it became clear the need for a modern way to proudly display SAU’s athletics history. Careful consideration of the options on how to achieve this led to the decision to go with a pair of touchscreen televisions to allow for a full interactive experience for fans while also giving the option of more than one person to explore the history and achievements at the same time.

In addition to these interactive screens being available inside the Watson Center, fans can also take part from the comfort of their own homes or offices by going online to saumuleriders.touchpros.com. This allows fans the opportunity at any time to explore SAU’s rich athletic history.

Some of the featured sections include “Hall of Fame,” “Individual Honors,” and “Team Championships.” In each section, fans can look back and read about the great accomplishments of numerous former Mulerider greats and championship teams! 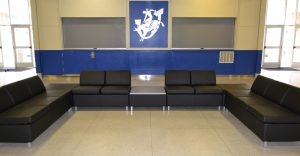 Built in the 1960s, the W.T. Watson Center received a facelift recently with cosmetic upgrades to the exterior of the building as well as the interior and its lobby. On the exterior, a pair of visually-stunning Mulerider logos now serve as an unmistakable beacon for all Mulerider Athletic events held inside.

On the inside, the concession stand area was overhauled with new countertop space and the addition of metal rolling windows on both sides as well. Anchoring those rolling windows is a sleek silver-clad Mulerider logo directly in the middle of the concession stand. New lobby furniture that faces a pair of large flat, screen cable-connected TVs were also added to provide fans and students a more comfortable experience while in the W.T. Watson Center. 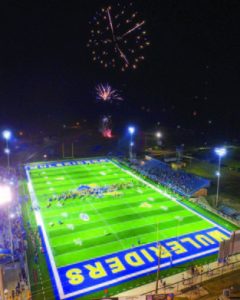 SAU football enjoyed one of its most successful seasons in program history in 2016 with nine wins in the regular season and a bid to the Agent Barry Live United Bowl in Texarkana for post-season play. The success of the team on the field in some respects mirrored some facility enhancements that made Wilkins Stadium at Rip Powell Field one of the most aesthetically-catching playing surfaces in the country, especially when adorned “Under the Lights”! Over the summer, brand new artificial turf was installed by GeoSurfaces, a professional engineering firm that specializes in the design, development, construction and installation of high performing sports surfaces and sports lighting systems, and whose CEO is an SAU alum, Charlie Dawson. The design of the turf featured alternating shades of green every five yards with the middle 20 yards of the field displaying a large Mulerider logo. Additionally, Wilkins Stadium received upgraded lighting in 2016 as brand new LED light poles were installed making SAU the only football stadium in the state of Arkansas with LED lighting.