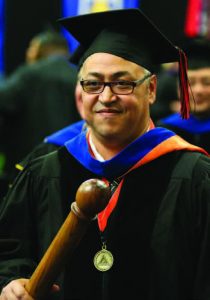 Dr. Abdel Bachri, associate professor of physics, has been named interim dean of the College of Science and Engineering. He will serve in this capacity following the resignation of Dr. Scott McKay, who has accepted a similar position in South Dakota.

In making the announcement, Dr. David Lanoue, SAU provost and vice president for academic affairs, said, “I am confident that under Dr. Bachri’s leadership, the College will continue to thrive.”

Lanoue called Bachri “one of the most highly respected faculty members at SAU, and I look forward to working with him during the coming year to strengthen our academic programs and enhance student success.”

Bachri was named Honor Professor this year and led the processional at commencement ceremonies. He completed a BS degree and an MS from the University of Hassan II, Casablanca, where he majored in physics. He also received a master’s in High Energy Physics from the International Center of Theoretical Physics in Trieste, Italy, and a PhD in Theoretical Particle Physics from Oklahoma State University. Bachri teaches Modern Physics, Physical Optics, Analytical Mechanics, Classical Electrodynamics, and other courses.

Bachri acknowledged it would be “hard for me to step away from being a teacher, I have always been one, and I’ll always be a teacher first.”
Bachri said that his “primary focus” would be representing the view of his colleagues. “Until we fill the position with a permanent dean, I am happy to work to optimize (our) offerings, shore up and promote our existing programs, and provide a good customer service experience that will help us retain (students).”
Looking ahead, Bachri said that next year “ought to be about recruitment and retention.” He also pointed out that the College will soon pursue ABET accreditation, which will “further enhance our standing. You will see a surge in enrollment.”

Bachri arrived at SAU in 2007 as an assistant professor of Physics and became associate professor in 2011. In 2014, he became chair of the Department of Engineering/Engineering Physics.

Bachri and Lanoue both extended their thanks and appreciation to Dean McKay. “I wish him the best on his next adventure,” Bachri said.

McKay’s “positive impact on SAU will be felt for years to come,” Lanoue said. “His vision, creativity and hard work have transformed the College of Science and Engineering and have greatly elevated SAU’s visibility in the STEM fields.”