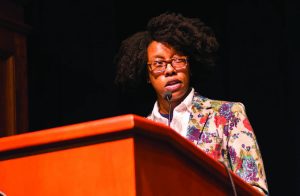 Dr. Donika Kelly, a 2005 alumnus of Southern Arkansas University, delivered the Kathleen Mallory Distinguished Lecture Series program on April 4 at SAU, reading to her audience “love poems” from her first published collection, Bestiary. The date would have marked the 80th birthday of Mallory, who taught Kelly – formerly Ross – while she was a student here.

“I was a student in her composition class,” Kelly said. “I’m excited to give this lecture because it feels like a return on her investment in me and my work.”

That investment resulted in Bestiary, a critically-praised and award-winning collection that was shortlisted for the 2016 National Book Award for Poetry. Kelly’s poems have also been published in Gulf Coast, Indiana Review and the Virginia Quarterly Review. She lives in western New York, where she teaches creative writing at St. Bonaventure University.

Kelly received an MFA in Writing from the Michener Center for Writers at the University of Texas at Austin and a Ph.D. in English from Vanderbilt University.

The poems in Bestiary use animal metaphors to examine human emotions. They also incorporate such mythological characters as the mermaid, the griffon, the satyr and the centaur.

Kelly said she and her family moved to Magnolia from Los Angeles when she was 13 years old.
“My mom had family here,” she said. “We moved from Compton, where the school system was very poor. The schools (in Magnolia) actually had books and lockers and the teachers had a lot less stress.”

Though she wrote “bad poetry” in high school, she didn’t realize she wanted to write professionally until she became a student at SAU. Creative writing wasn’t part of the curriculum, but academic writing, taught by Mallory, pushed her toward that discipline.

“She was very traditional in terms of expectations,” Kelly said of Mallory, who passed in 2014. “But her standards were exacting. She taught me how to write within forms, and then how to make those forms my own.”

During her lecture, Kelly humorously disavowed prose. “That’s typing,” she said, to laughter. “To write 20,000 words does require you to do a lot of typing. My poems are a couple of hundred words, they’re short.”

Kelly expressed fond memories of SAU and Magnolia. “I remember giving poetry readings as a student, and other students and faculty would actually show up and listen to me!” she said, laughing. “I felt supported in many spaces on this campus.”

Asked whether she thought she made the right decision in pursuing the field of creative writing, Kelly said, “Yeah. Here I am.”

Bestiary is available through Amazon.com, barnesandnoble.com., and other online booksellers. It is published by Graywolf Press.

Dr. Kathleen (Jordan) Mallory was an SAU icon. She was one of the first two black students to attend classes at Southern State College while teaching at Stephens, Arkansas and acquiring her M.Ed. from the University of Arkansas. She taught in various public schools and was a proponent for education. In 1974, she became the first black faculty member in the general education program at SSC. She received her Ph.D. from the University of Nebraska at Lincoln. The Kathleen Mallory Distinguished Lecture Series honors her memory by bringing scholars in African Diasporic and African-American Studies to SAU to share their knowledge with students, faculty and the community.