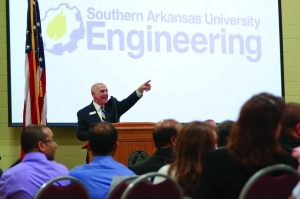 It was a beautiful day on October 5, 2016, and a great one for SAU, the south Arkansas region and, more importantly, SAU engineering students.
“There’s no doubt about that,” said Dr. Trey Berry, president of SAU, during the dedication of the new Engineering Building, formerly the National Guard Armory. “It’s been a long road,” he said of getting the building ready, “but we’re here.”

A $1.4 million renovation project turned the former armory into the new state-of-the-art engineering facility neighboring the SAU Science Center. Six labs were created along with three large classrooms, and the motor pool has been converted to a machine shop for hands-on instruction and training.

Distinguished guests included Fourth District Congressman Bruce Westerman – an engineer by training – state and local officials, area public schools and chambers of commerce, and Arkansas National Guard Adjutant Maj. Gen. Mark Berry. President Berry announced that the interior of the building would be named the Robert and Edna (Cook) Norvell Center, in honor of a gift of more than $1 million by the alumna. Funds from this endowment will benefit future students in the form of what will be known as NORCO SAU Engineering Scholarships. 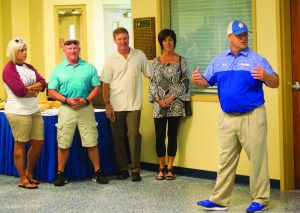 Just before the fall semester commenced, the finishing touches were being placed on a new state-of-the-art athletic training facility located inside the W.T. Watson Center. The new 2,500-square foot facility served a major upgrade for the athletic training program, which previously was housed out of a much smaller room in the Watson Center. With the increased space, the AT program at SAU can now treat numerous athletes at once while also providing a top-notch area for instruction for the athletic training majors on campus. The new facility was formally dedicated on September 10. 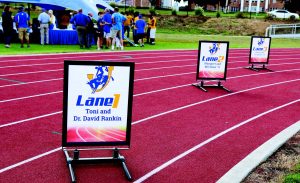 Once it was announced that track and field was back at SAU starting in the fall of 2014, planning and fundraising began for a complete overhaul of the previous facility to provide a state-of-the-art complex that could once more host some of the most decorated track athletes and prestigious meets. On Sept. 24, 2016, those efforts were realized as the facility, which was constructed by GeoSurfaces, was unveiled and officially dedicated. And it won’t take long for the newly-minted Mulerider Track Complex to be put on display with the Dan Veach Invitational scheduled to take place on Saturday, March 25. That one-day home meet will also serve as a preview of sorts for the upcoming 2018 Great American Conference Track and Field Championships in which SAU has been tabbed as the host institution. 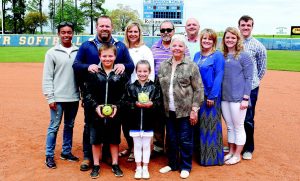 Completed just prior to the 2016 softball season, the $1.3 million facility which features two identical playing fields, a player’s locker room, trophy case, coaches offices, and full concession stand, was on full display last May as the Mulerider Softball Complex served as host of one of the sub-regional tournaments for the NCAA Division II Central Region. With more than 1,500 fans attending SAU’s three games, the Lady Muleriders cruised through that tournament. That weekend of action highlighted what was an historic inaugural season at the facility. On April 1, the complex and its main playing field were officially named “Dawson Field at the Mulerider Softball Complex” in recognition of the generosity of the Dawson Family in helping complete the project.