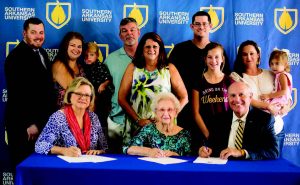 On Monday, July 31, Mrs. Bobbie Ruth Webb of Magnolia donated a building that had been in her family for more than 100 years to Southern Arkansas University. Mrs. Webb is a proud two-time alum of the University: she is a 1949 graduate of Magnolia A&M and a 1964 graduate of Southern State College. Six members of her immediate family are graduates of SAU.

Mrs. Webb’s grandfather, Mr. K.S. Couch, opened a grocery store in the space located at 113 N. Jefferson (on the square) in the early 1900s. Her father later joined the business, creating KS Webb & Son. Mrs. Webb said she has fond memories of playing in the store, and was happy to donate the building to SAU as it will “strengthen the connection” between the University and the community.

She said she is proud of the changes she has seen at SAU over the years. “I’m thrilled that it has grown as much as it has,” she said. “SAU has always had a good name. It’s known and respected throughout the education field. Southern State College was highly rated. I think it is a good thing for SAU to now be on the Magnolia square.”

Dr. Trey Berry, president of SAU, said the building will house a University retail store and community education/event space. The new venture will provide opportunities for internships for many SAU students, Berry said. “It’s a tremendous day,” Berry said, accepting the deed for the building. “This donation brings together the two things Mrs. Webb loves – her family, and Southern Arkansas University.” Berry said he is hopeful the space will be in operation by early 2018.

In talking about her history with the building, Mrs. Webb said the mercantile owned by her father and grandfather “sold farm-raised goods. Mr. Couch had a complete grocery and feed store. We raised the beef and that’s what we sold. When I was little, my mother had a big box that she would put me in whenever she brought me to the store. All the men who came to trade with daddy would pick at me and sometimes slip me candy mother really didn’t want me to have. When I was old enough to go to school, I would walk across town from the far end of West Main Street to Central Elementary and then walk back home for lunch. I was always exhausted. Mother finally told Daddy she would work at the store if he would let her drive me to school. It was a deal.”

She recalled her mother, Cora Lee, working in the store alongside her father, nicknamed Tip. Her parents allowed customers to charge groceries, which, in the Depression Era, was “a leap of faith. For Daddy, your handshake was your word.”

Not only business and civic-minded, her father was a very good baseball player and a huge baseball fan. The current Magnolia Panther Baseball field sits on what was formerly known as Tip Couch Field. “The late Archie Monroe remembered Daddy playing short stop for the City League,” she said. “He never missed a Panthers home game. He loved it.”

Regarding her own education and career, Mrs. Webb was a very active student during her academic career in Magnolia Public Schools. She was involved in National Honor Society, cheerleading, Student Council, drama club, glee club, and was voted Best Figure three years running. “I went out for basketball so I wouldn’t have to take PE,” she laughed.

Mrs. Webb grew up wanting to be a teacher and after earning her teaching certificate she spent her career in the Magnolia School District. “My father was on the Board of Education and he had hired Mr. Cole, who was then the superintendent,” she said. “I went in for my interview, and he said, ‘Well, it looks like everything is alright.’ I started teaching second grade. I didn’t know enough to teach first grade when I got out of college.”
She said there was “more involved in teaching first grade than second – they came to you as a blank sheet of paper. They had to learn all the basics. I’ll never forget one little boy. He was crying on the front steps during recess. I asked him what was wrong. He said, ‘I just found out you have to be in the eighth grade to quit school!’ This was his first day.”

She said she loved teaching. “My principal always said, ‘you won’t make a lot of money, but you will always have a job.’” On her retirement in 1989, she was honored as a master teacher. “I taught a lot of student teachers,” she said. “On my last day, they each brought me a rose.”

Her husband, Billy, worked for the local post office for 30 years. Together they enjoyed a lifetime in Columbia County raising their three daughters-Anna Margaret Skinner, Becky Richards, and Beth Greening. Two out of the three plus a son-in-law graduated from Southern State. Beth’s son, Shaun, and his wife, Nicki Camp Greening graduated from SAU and share a special bond with the University: “They got married at SAU in the Greek Theatre,” Mrs. Webb said of Shaun and Nicki, “on the hottest day of the year!”

Mrs. Webb is proud that the building on the square, a part of her family for generations, is now part of SAU. “I think it’s marvelous,” she said of plans to open an SAU retail store in the building. “It will be wonderful to have those students run it.”

Though it has grown in enrollment, SAU “still has that hometown feeling,” she said. “I still exercise in the swimming pool on campus every day–the same one that was there when I was a student. It keeps me moving.”