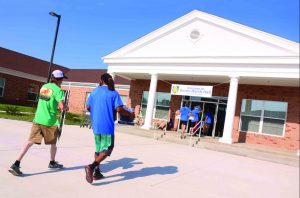 Southern Arkansas University in Magnolia has continued its long-running growth trend this fall with at least five new enrollment records, including the University’s largest freshman class for the fifth consecutive year.

“We feel very fortunate that students continue to choose SAU, not only for our dynamic academic programs, but also because of our commitment to a campus-wide ‘culture of caring,” said Berry.

Also increasing this year were students choosing to live on campus, with SAU residence halls being home this fall to more than 1,850 students. The increase from last year’s residential record of 1,764 was made possible by the opening of two new residence halls this August, Eichenberger Hall and Burns-Harsh Hall, both named in honor of passionate benefactors of SAU. Other campus improvements occurred over the summer to prepare for the growth, including a cafeteria expansion, moving of the tutoring center to the centralized library, and the main throughway being converted to a boulevard for improved pedestrian and cyclist safety and enjoyment.

Finally, the SAU Honors College incoming class is the largest in the organization’s history. The program allows diverse students to take classes together, travel, and live in Honors Hall.

Similarly, SAU students living on campus have numerous living and learning communities, or Residential Interest Groups (RIG), in which to be involved. For example, the new Eichenberger Hall houses a science and engineering RIG and is located just a stone’s skip across the pond from SAU’s year-old Engineering Building and attractive Science Center. Burns-Harsh Hall, the latest addition to the west side of campus, has become the third facility to house SAU’s growing freshman leaders in the Residential College and Leadership College groups.

“Our students are very excited about the quality of residence halls they were able to move into and the amenities provided. Paired with the residential interest groups available, it is a great choice for them,” said Dr. Donna Allen, vice president for student affairs.

Berry also noted the national attention SAU has earned over the past several years with affordability accolades. The two most recent put SAU on top lists for student economic mobility. SAU was put at the top in Arkansas and among the other notable universities across the U.S. on the “Best Schools for Economic Mobility by State” rankings on Zippia.com. Also, OnlineU.org listed SAU among the country’s top 20 “2017 Most Affordable Online Colleges for Student Economic Mobility” list prepared by OnlineU.org.

This national recognition has helped SAU attract students from more than 36 states and 31 countries. However, SAU is among the countless institutions across the U.S. that saw a decline in international students this fall. This decline resulted in a slight dip overall in enrollment but the healthy increase in domestic students is encouraging.