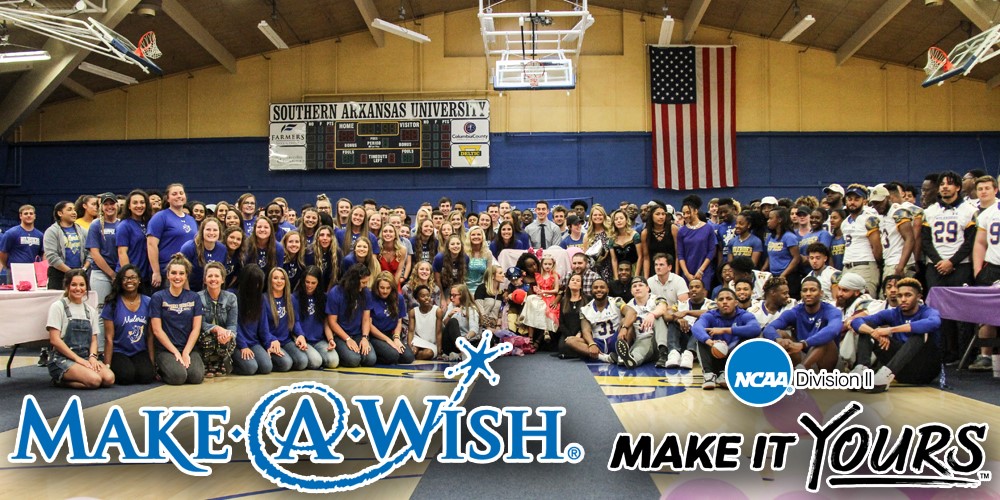 Despite not having a volleyball or basketball game played in it since the end of February, the seemingly dormant W.T. Watson Center was brought to life and bore witness to a magical moment on March 29 as over 300 Southern Arkansas University student-athletes, coaches and administrators were on hand to provide a Make-A-Wish® Reveal fitting of a princess to Reagan, a 7-year-old girl from Fouke, Ark.

Reagan, who is battling a rare condition known as Pulmonary Arterial Hypertension (PAH), loves all of the Disney princesses and her wish is to go to Walt Disney World. A few short weeks following that night’s reveal, Reagan’s wish will come true!

“Revealing Reagan’s wish to her was such a great opportunity for our student-athletes to see first-hand what kind of an impact they are capable of making on a young person’s life,” noted SAU SAAC Advisor, Kasey Wylie. Also the school’s Senior Woman Administrator and Assistant AD for Compliance, Wylie added, “Getting to see Reagan’s face light up as we helped make her wish come true was truly an unforgettable experience”.

On her special wish reveal night, Reagan was greeted at the entrance of the Watson Center by several escorts. Among them were princesses, Anna and Elsa from Frozen. Reagan and her escorts then entered the gym to find over 300 Mulerider and Lady Mulerider student-athletes there to help her transform into a princess of her own.

Along the way, Reagan got her hair and nails done, picked out her very own princess dress and chose the perfect pair of princess shoes as well. Reagan then selected a magical wand, and finally received a princess crown to complete her transformation.

After she became a princess, Reagan, alongside a chorus of cheering from Muleriders and Lady Muleriders all around, walked down a long blue carpet that appropriately ended at the feet of her very own throne where she sat to hear it revealed that her wish of going to Disney World was being granted!

“At the beginning of the year, I challenged our student-athletes to be a part of something bigger than themselves, and the built-in connection between DII, SAAC, and the Make-A-Wish® Foundation gave the perfect platform for them to make a difference in someone’s life,” remarked SAU Director of Athletics, Steve Browning. “Truly my words cannot express how proud I am of our athletes’ accomplishments in achieving this goal, but the ear-to-ear smiles of Reagan that night certainly can!”

After that initial challenge by Browning at the start of the 2017-18 school year, Mulerider Athletics and its StudentAthlete Advisory Committee (SAAC) have raised over $8,000 for the Make-AWish® Foundation. That amount reached the average threshold required by MakeA-Wish® to hold a wish reveal party, and thus allowing SAU to grant Reagan’s wish.

Since 2002, the Division II SAAC and Make-A-Wish® have been partners, and in that time, NCAA DII SAAC has become one of the foundation’s largest and most consistent contributors having raised more than $5.3 million toward granting the wishes of children with life-threatening medical conditions. More than 660 wishes have been granted through Division II contributions.