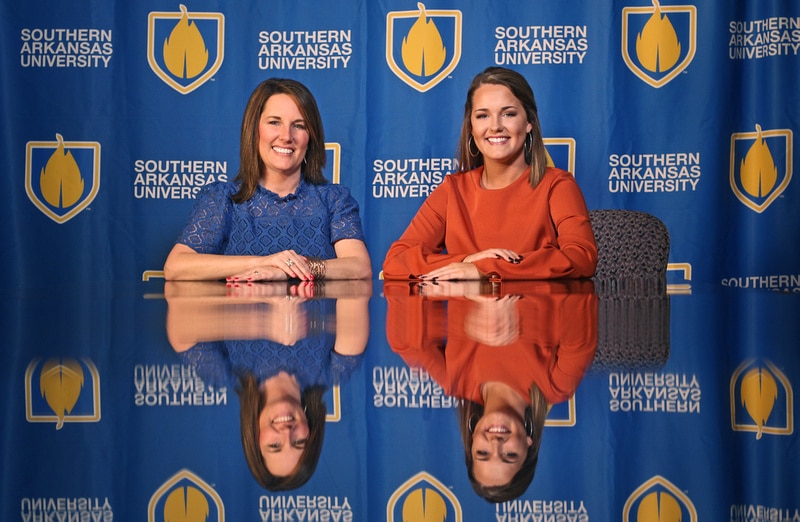 Kristina and Kelsie Madison both credit the Southern Arkansas University Rankin College of Business (RCB) with changing their lives for the better. The mother and daughter duo had the chance to catch up and visit with mutual professors in February when Kristina was invited to participate in The Executive Network.

She was among more than 10 SAU Business alumni in executive positions who returned “home” to share with current students their path to success. She spoke of challenges she overcame on her way to becoming a Walmart executive. Admittedly a little anxious to speak to large groups of students, her nerves were eased by the accompaniment of her daughter, Kelsie, a senior business administration major, who has become no stranger to being in front of crowds.

Kristina received her undergraduate degree from the College of Business in 2004 and completed her MBA at SAU in 2012. The former El Dorado resident is now senior manager II, fuel operations, for Walmart in Bentonville, Arkansas, a position she calls her dream job.

Kelsie had opportunities to go to larger universities, but her mother’s experiences at SAU and career choices helped tilt her toward a more favorable choice.

“I had a scholarship to go to Baylor,” Kelsie said. “It was one of the hardest decisions I ever made, but I had always known SAU and I always thought it was cool. It still is. My mom came here for her education, and she had a big impact on my decision. I’m glad I made it.”

Kristina said it was important to her that Kelsie choose SAU. “The connection with SAU is very powerful. She could have gone to a larger university, but this one has so much more to offer.”

Kristina said the feeling of family and the caring attention of the faculty helped her overcome the challenges she faced as a nontraditional student. “It feels like home because all my professors were so supportive of me when I was an undergraduate. They have real love for their students.”

She took courses at SAU full-time while she and her husband raised their twin daughters, Kelsie and Kylie (also a student at SAU). “My husband encouraged me to go for it,” Kristina said. “I loved SAU for its small-town feel, small classes, and one-on-one interaction.”

Later, Kristina decided a master’s in business was necessary to complete her education and further her career. She enrolled in the MBA online program. “I really appreciate everything the online program allows non-traditional students to do. I had many of the same professors who were so helpful when I was an undergraduate.”

By this time, the family had grown to include Kohlie, a special needs child diagnosed with Phelan McDermid syndrome, a rare and untreatable condition. The online MBA allowed Kristina to obtain her educational goals while balancing her roles as a mother, wife, and full-time employee at Murphy Oil.

Kelsie will graduate in May 2019, and her mother’s advice has continued to help shape her college experience. As a nontraditional student, Kristina feels as though she missed out on being more involved at SAU. It took a little time for Kelsie to come out of her shell, but has since become an esteemed President’s Ambassador and was even crowned Miss SAU in 2017. She competed in that year’s Miss Arkansas pageant.

When Kelsie became Miss SAU, her platform was to be an advocate for her sister Kohlie’s condition. “I was able to share her story,” Kelsie said. “I was very emotional at Miss Arkansas, because that title can change your life. But whether I had the sash or not, I was still going to share Kohlie’s story.”