Two students from locales that might not ordinarily be associated with Arkansas have found a home at Southern Arkansas University. Gabrielle Gleason, a sophomore Elementary Education major from Hilo, Hawaii, and Levi Myers, a freshman who spent many years living in Fairbanks, Alaska, bring their unique personalities to SAU. Gleason is a member of the Mulerider Rodeo Team, while Myers has transferred his love of the outdoors to Magnolia. 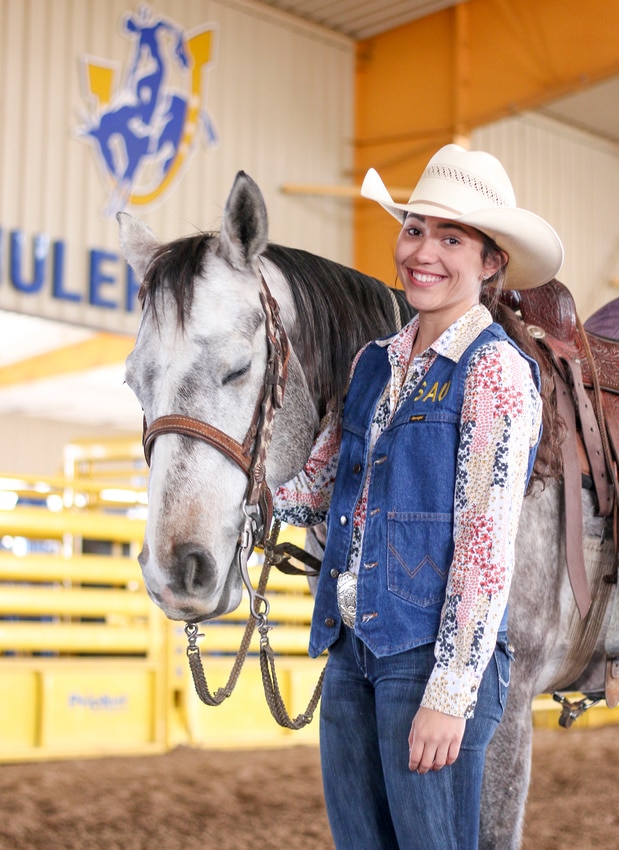 Not Her First Rodeo

Since arriving at SAU last year, Gleason said she has found the University to be “a perfect fit” for her academic and career goals.

She chose SAU after an extensive online search for an affordable university that also fields a rodeo team.

“I’ve done rodeo since I was in middle school,” Gleason said. “Rodeo is very popular in Hawaii, which a lot of people don’t know. My stepdad worked on dairy cattle and horse ranches, so I grew up in that environment. I did all the events I was eligible for – barrel racing, team roping, breakaway roping, cutting and goat tying. Not that I was good at all of them! I wanted to be very well-rounded.”

“What really sold me was the rodeo facility,” she said, referring to Story Arena. “It is truly excellent. I was lookingat other teams in the region, but when I read about SAU, I emailed Coach (Rusty) Hayes about the program, and he answered all my questions. I thought there was no way I’d make it, Coach is so particular about the team, but he gave me a spot. He helped me fit right in, and I’ve felt very comfortable.”

Having an indoor arena close to campus makes practicing easy. “There’s no excuse not to,” Gleason said. “It’s all right here. It’s great to be able to practice indoors.”

Though Gleason had never personally visited SAU before arriving for her first semester as a freshman, she had, ironically, met several of its rodeo team members at the National High School Finals in Rock Springs, Wyoming.

“I remembered talking to them there and going, ‘Hey, I’ve met you before,’” she said, with a laugh.

Gleason, who is friendly and quick to smile, said she enjoyed her trips to the National High School Finals, though they were far from home.

“We didn’t get to bring our own horses to Wyoming,” she said, “so we had to borrow them. That made it tough to do well. The experience let me know that I wanted to continue doing rodeo in college.”

She said that coming to Magnolia, Arkansas, from Hilo, Hawaii, did have its challenges. One was transporting her horse, Bobo, whose route to Arkansas was a long and winding one. Bobo, who is three, is considered young for rodeo competition, but is making the adjustment well. Gleason said most rodeo horses are in their prime at ages 10-12. “Bobo has had to be 10 years old at age three,” she said, laughing. “He’s my best friend, and he’s really impressed me with how quickly he’s gained time. I’ve been very happy with his progress.”

An advantage to living in Magnolia is its central location, especially for the rodeo team, which is often on the road. “It’s a good home base. I have enjoyed traveling with the team and it’s been a huge learning experience. I had never crossed the Mississippi River before – I’d never been east of Texas before.”

Hayes said Gleason has been a solid addition to the Rodeo Team. “She has soft hands,” he said, explaining that a rodeo rider must be able to communicate well to an animal through touch. “She handles the reins just right, she has excellent skills.”

He said it isn’t unusual for him to be contacted by potential students via the website and email. “I chose Gabby because of her persistence,” he said. “She asked questions and was obviously serious about wanting to come and ride rodeo. We are proud of her.”

Gleason said she hopes to teach on a lower elementary grade level with her degree, but is keeping her career options open. “I believe in giving back to the community, so I do plan on going back home to teach,” she said.

In choosing a university and transitioning to Magnolia, Gleason has tried to keep her family in mind. “My younger sister is Ivy League-quality, and I wanted to make sure she could go anywhere she wants to go. My little stepbrother is 10 and he’ll want to go on to college, so it was important for me to find an affordable university home. SAU has been a great fit. I couldn’t ask for more.”

After a smooth freshman year, Gleason has found the right balance between classwork and rodeo, taking 15 hours of coursework in the spring semester and practicing at the Arena four times a week. She volunteers locally at CCAPS and attends Rugged Cross Cowboy Church. 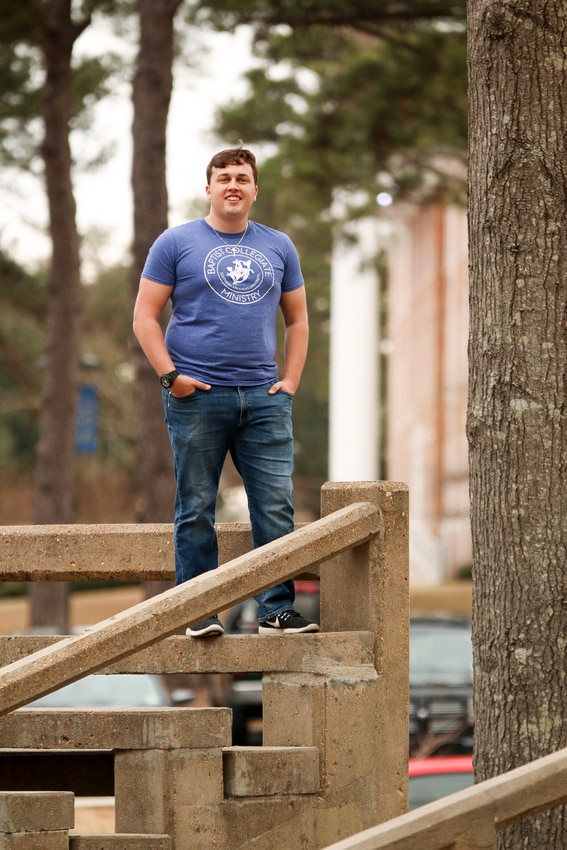 Myers, like Gleason, found SAU after an online search for the right university. He began his search in his senior year of high school.

“I started clicking through web sites looking for a scholarship,” he said. “I narrowed my search to a handful of schools, and SAU had the best campus by far. It was comparable to Arkansas State University or even the University of Arkansas – schools that cost considerably more. It has such a welcoming staff and atmosphere.  Also, the website was better organized than most. There was not much out-of-pocket cost, and I applied online and qualified for a scholarship.”

Myers and his family lived for six years in Alaska after his father, a pilot in the U.S. Army, transferred to Fort Wainwright, near Fairbanks. “We moved there from Alabama. My dad went on ahead and got our house ready, then he flew back down to Arkansas, where we were staying, and we all drove to Alaska together. It took 12 days to make the drive.”

Acclimating to extreme cold was the biggest challenge for Myers, who was born in Tennessee. “Obviously, I’m still walking around in a t-shirt and shorts when it’s 20 degrees here,” he said, laughing. “In Alaska, in elementary school, you have to put on a jacket for recess when it’s 10 below zero. At 20 below, recess is canceled. Right now, it’s 27 below, so I’m sure the kids are upset.”

As a student at West Valley High School in Fairbanks, Myers developed an interest in marine biology, thanks in part to time he spent hunting in the Alaskan wilderness. “My dad and I legally hunted caribou, bear, moose, mountain goat, lots of stuff,” he said. “We also went deep-sea fishing. I had a good role model. My dad and I made it a big part of our lives.”

Encounters with grizzly bears were not uncommon on his expeditions. “If they notice you, bears will run,” Myers said. “They are very smart animals and are typically afraid of humans. A bear will only approach if you’re between it and its food, or its cubs. They are hardy animals and can run great distances.”

On one expedition to Kodiak Island, a grizzly walked into the Myers’ camp. “I’ve seen 60-70 bears in the wild, but this was one of the biggest, probably 1,200 pounds, standing about 40 yards from me and Dad. Fortunately, it decided to leave. We could see it running away up the hill, the size of a VW Bug,” Myers said.

Myers finished high school in Paragould, Arkansas. “My mom wanted to come back to Arkansas, where we have family, but I pushed to stay in Alaska a little longer. I started looking for colleges the last part of my senior year.”

He said his professors truly care about their students’ education, and he has been inspired in particular by the President’s Ambassadors. Though still undecided on his major, Myers said he’s enjoying his time “finding himself ” at SAU. He is active in the Baptist Collegiate Ministry and a member of the marksman’s team.