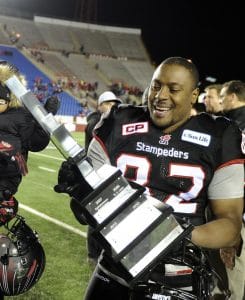 A dazzling football career that started by catching the attention of Mulerider fans in 2001, Nik Lewis continued to rack up receptions and records throughout his acclaimed 14-year run in the Canadian Football League (CFL). 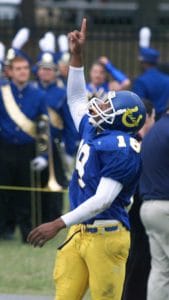 In Lewis’ stellar three-year career at SAU, he became a two-time All-America First-Team selection at wide receiver as he racked up 162 receptions for 2,852 yards and 36 touchdowns. At the time, all three of those marks were school career records with his yards and touchdowns enduring as program standards to this day. In each of his last two seasons as a Mulerider (both All-America campaigns), Lewis had more than 1,000 receiving yards and 14 touchdowns.

That impressive career at SAU was a precursor to what Lewis would go on to accomplish professionally.

A reliable target for his quarterbacks and an immensely popular fan-favorite North of the border, Lewis opened his CFL career with nine-consecutive seasons with at least 1,000 yards receiving. Four years after that impressive streak was snapped, Lewis reached the 1,000-yard milestone once more in 2016 – giving him 10 such seasons in his career, which is tied for the second-most ever in CFL history. 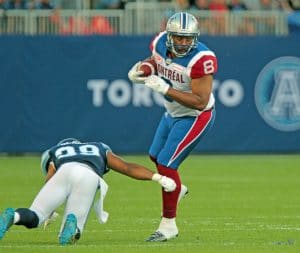 Fueling that yardage production for his career in the CFL was a volume of receptions as well. In each of those first nine seasons where he had more than 1,000 yards receiving, Lewis also had at least 67 catches and hauled in an even 100 passes in 2012. The two years after that, Lewis’ reception totals dwindled some to just over 30 each year, but over his last three seasons, Lewis had at least 70 receptions with a career-best 102 coming in 2016.

Needing just 52 catches to stand alone atop the all-time receptions list, Lewis achieved the feat in late August against Winnipeg. In that game, Lewis hauled in a season-best 10 catches with his ninth reception being the record-setter. 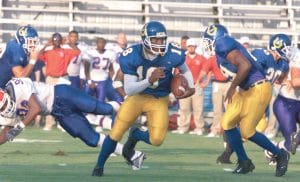 Lewis’ CFL career saw him play in 226 games, in which he would amass 1,051 receptions for 13,778 yards and 71 touchdowns. In addition to his all-time reception record, Lewis also stands within the top-five of the CFL’s all-time receiving yards list.

In terms of awards and accolades for his career, Lewis was named the CFL’s Rookie of the Year in 2004 and was a six-time All-Star. He also won a pair of championships: hoisting the Grey Cup in 2008 with the Calgary Stampeders and again in 2014 with the Montreal Alouettes.