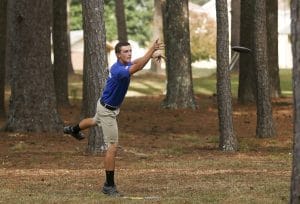 Disc golf has become an increasingly popular activity among students at Southern Arkansas University. A Mulerider Disc Golf Team has been established, and an 18-hole course has been created on the campus.

“The team has been an amazing surprise,” said Dr. Andy Peeks, team sponsor. “I am humbled by how well they are doing. Their progress has been so swift. In practically no time, they have become the largest disc golf team in the state and among the largest in the nation.”

“The first year, we just started playing, we didn’t really broadcast it that much,” he said of the team’s origins and the beginnings of disc golf on campus. “Some band people knew we were playing, and their friends found out, and it grew by word of mouth.”

Hunter’s brother, Christian, a former SAU student, had set up 11 “baskets” around campus, forming the basis of the SAU course. “We used those baskets when I got here,” Jeremy Hunter said. “We made new holes as we went along.” 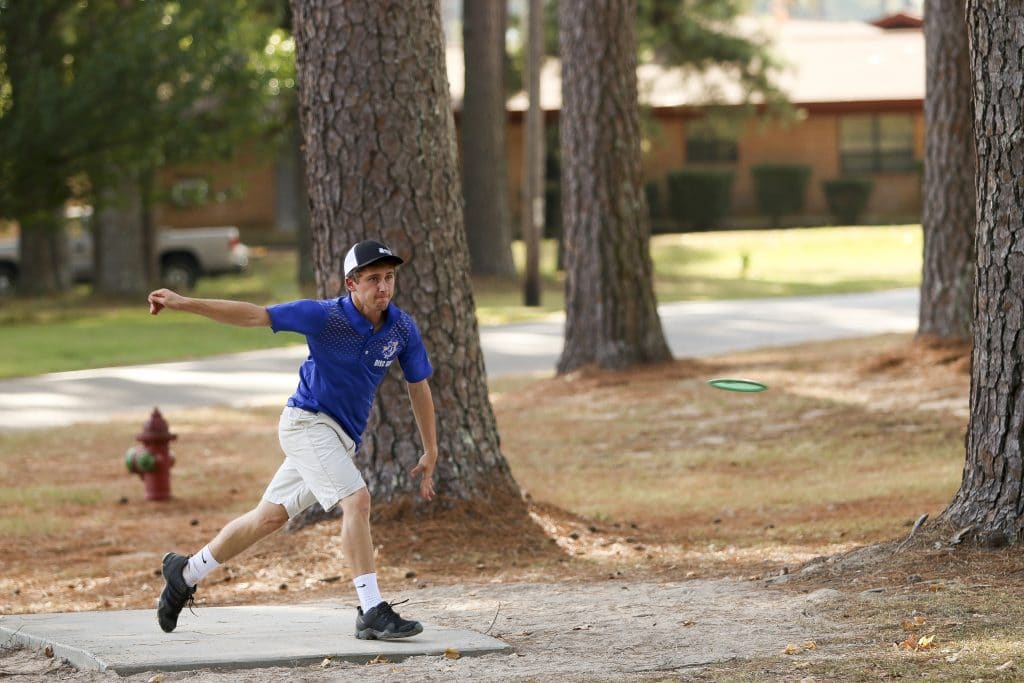 Sarah Adcox, director of the Mulerider Activity Center (MAC), said Dr. Donna Allen, vice president for student affairs, first contacted her last spring about a disc golf team forming. “They wanted a new course,” she said. “I had been in charge of intramural sports on campus since 2011, and at that point, there was no disc golf at SAU. I had a student, Christian Hunter, who was really interested, and he and I ordered about six baskets that were portable and served the purpose, but we knew we would need an actual course.”

The game is played exactly the same as golf, with each four-man team, or “card,” teeing-off in front of the Greek Theatre and winding their way across campus to each hole.

Players have to consider the dynamics of the discs themselves. Discs have a smaller diameter than the typical Frisbee, and most holes are par three.

“Anybody who wants to can play,” Adcox said. “It’s competitive, but it’s still an individual sport. A lot of universities now have disc golf teams and we certainly needed to keep up with what others are doing, and this has proven very popular. You don’t have to join the team to play.”

She said discs are available for checkout at the MAC.

Administration has been “very supportive” of the formation of disc golf on campus, she said. “I met with Dr. Trey Berry about it, and we rode around campus in a golf cart, looking at areas for the course. He and Dr. Allen purchased the team shirts. They are 100-percent supportive of everything we have done.”