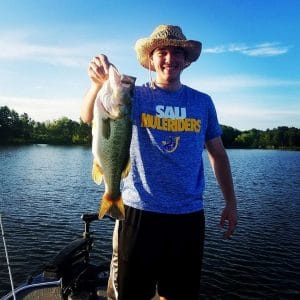 The SAU Bass Fishing Team experienced “a blessing” on Lake Dardanelle when their two teams finished in 9th place and 11th place in the Arkansas Collegiate Series Championship Dec. 2-3, 2017. It was the first championship in which the team has qualified and competed.

“Finishing in the top 10 is great for our first championship,” Basinger said. “It was a great learning experience. We made the biggest overall jump of the weekend, from 20th place to 9th.” 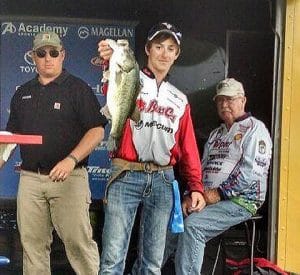 “For our team, this was a great confidence builder and a great tool for recruiting,” Basinger said of the finish. “You gain respect and show the other teams what you can do. We’ll take what we’ve learned and get ready to move onto the national stage in the spring. We won’t be rusty by the time we get to the national qualifiers – we’ve had this experience to hone our skills and keep our wits sharp. We’ll be fishing anywhere from Texas to Louisiana to Oklahoma up until April. We will also be doing some fund-raising to replenish our travel funds.”

He said that after two days of practice, figuring out how to fish the lake with cloud cover and wind, the first day of the championship was iffy. “We had bluebird skies, all sun and no wind, so it was tough.”

Vines and Keith “gunned their way to their finish,” he said. “We learned to change our game plans. We were able to adjust on the fly and that’s the most dynamic way to fish. You have no idea what’s going to happen.”

Despite a first day that didn’t quite measure up, things improved drastically on the second day, leading to the huge jump on the boards. Basinger and Harger jumped 11 spots the second day in the championship. 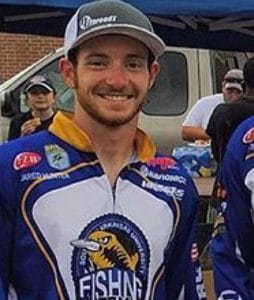 “It comes down to having the best pattern over two days,” Basinger said. “I’ve fished on Dardanelle in several previous tournaments, I’ve seen the waters before, and I have an idea how the lake sets up. That experience really came into play. I’ve spent hours in my boat, scanning the lake, researching fish biology and behavior, and I know where they feed and where they move in winter.”

“A lot of it is experience, a lot of it is just luck,” Basinger said. “You’re just waiting to be blessed with one bite – you can take that bite and dissect it. Sometimes you’ve just got a big box of puzzle pieces; what will the weather be like? How deep water were you sitting in? What are the bass feeding on? And etc. You can break down that information from that one bite and it turns into a pattern. It was a blessing if not a masterpiece. I couldn’t sleep that first night after that rough day one, but I asked for God’s wisdom, and a game plan came to me, and the second day, we stuck to that plan.”

Vines and Keith had a great first day in the championship, sitting in 7th place. Though clouds helped Basinger and Harger, they did not help Keith and Vines. No matter, all the team members gave the glory to God. Vines said, “We had a great time and we never regretted anything because it was given to us by the glory of God.” 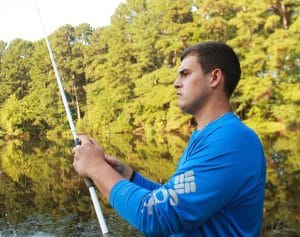 The team will have only a little downtime before preparing for its next few tournaments and the remainder of the season. Their big focus is the future of the club. “We’ll get a little more serious in our recruitment,” Basinger said. ‘We’ve got scholarships for the freshmen that are coming in next summer. We’ll watch the new guys in high schools as they go through their seasons – are they leaders, are they able to compete, or are they just doing it for fun? We want people who will represent SAU well. We’re getting our foot in the door with national championships. We want to be respectable and get the job done.”

Basinger said representing the Blue and Gold is the team’s top priority. “We want to show a good face and not disappoint our school,” he said. “When we wear the Blue and Gold, we’re not wearing just colors, we are wearing our community. This is our family.”