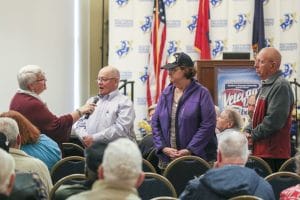 The sacrifices of military men and women, as well as those of their families, were honored at a special ceremony Wednesday, Nov. 8, in Grand Hall at the Reynolds Center at Southern Arkansas University.

Members of all branches of service were individually recognized at the annual Veterans Day Tribute. Special music was performed to honor each branch. Dr. Trey Berry, president of SAU, gave a stirring speech on the importance of a volunteer citizen fighting force.

Welcome and invocation were delivered by Associate Dean for Multiculturalism and Diversity Cledis Stuart. “It is an honor to recognize your service and sacrifice,” Stuart told the assemblage. He asked the audience to also recognize local first responders in attendance.

Deana Taylor, campus and community welfare coordinator, led the Salute to Troops, in which each veteran stood for an introduction. Included among the introductions were Curtis Brown, 99, and Bob Kehres, 101. Dalicia Torrence, SAU Heritage Singer, sang “God Bless America.” 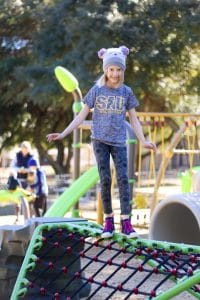 Southern Arkansas University is encouraging area youth to get outdoors and play after it officially opened the new SAU Community Playground on December 1.

“We are excited to be opening the new SAU Community Playground, which is truly a gift to the community,” said Dr. Trey Berry, SAU president.

The playground, located near the duck pond and tennis courts at SAU, is for children ages 2-12 and has an occupancy limit of 35. It includes several climbing components, a floating tunnel tower, pad and ring swing challenge ladders, and a single sectional slide. The ground covering is soft wood mulch, and the area is enclosed in a four-foot black chain link fence. Children must be accompanied by adult supervision at all times.  It will be open from dawn to dusk.

This project was among the first crowdfunding projects on the SAU Ignite website. More than 60 donors almost doubled the goal with a total of $14,840 given. Current Ignite projects include helping send SAU’s cheerleading squad to NCA College Cheer Nationals and a Mulerider Track Friends and Family fundraiser. Visit https://ignite.saumag.edu to participate in these efforts.

The playground is also supported by Making Magnolia Blossom (MMB), which is the community organization founded at SAU.

Battling food insecurity in Columbia County was the goal of a Feed the Funnel Party sponsored by The Pack Shack on Wednesday, Nov. 8, 2017. The party, which saw the participation of about 150 volunteers, was held at the Engineering Building and made possible by the efforts of around 20 SAU Greek and student organizations.

Haley Burrow, assistant director of Student Activities for Greek Life, said the groups joined forces to raise money and give of their time to fight the growing local problem of food insecurity. Arkansas is second only to Mississippi in the nation in food insecurity.

Jacinda Passmore, a senior agricultural education major from Conway, Arkansas, serves as the Sigma Alpha sorority’s philanthropy chair. “Our philanthropy is ‘agriculture in the community,’ and as part of my job, I needed to find a way to educate the community about agriculture. To do this, we decided to do a service project,” Passmore said. “Many of our fellow Arkansans are starving, so we as citizens need to stay educated on these matters.”

The entire Greek system banded together for this honorable cause. More than 22,000 meals were packed in the three-hour time frame, Burrow said. Each meal cost only 25 cents to produce, she said.

“It’s a great cause, and we are so proud of our SAU volunteers,” Burrow said. 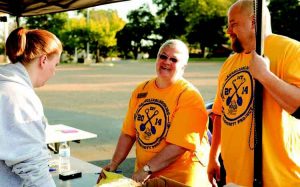 Serving others is not only vital to the mission of Southern Arkansas University but one of the things in life that makes Deana Taylor happy.

Taylor, SAU’s campus and community welfare coordinator, was recently honored by the City of Magnolia with its Citizen of the Month Award. Though recognized primarily for her contributions to Making Magnolia Blossom, a group of volunteers working to beautify the city, Taylor is involved in numerous other projects. She views volunteerism as an outreach of SAU and part of her personal ministry.

“I have always loved volunteering,” she said. “It can be challenging, but it is so worthwhile.”

Taylor, who started working at SAU in 2013 and is an alumnus of 1983, points out the importance of others in her work.

She applies her professional and academic background in social work to volunteering in the community. “It defines my ministry and my relationships. One of the most important things I tell people about volunteering is they should find something they love, and do it, and get their family and friends involved because that makes it fun.”

“It’s exciting to me to see a dream come to fruition,” Taylor said. “The logistics can be a challenge each and every time. But it’s always worth it. That’s what makes you feel good – overcoming challenges.”