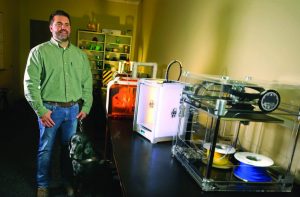 Brandon Foshee, founder of Fauxsee Innovations, LLC, of Magnolia, a 2006 alumnus of Southern Arkansas University, is developing a product that could drastically improve the lives of millions of blind and visually-impaired people around the world.

Foshee, who lost his own vision in 2003, is the creator of Roboglasses, a device that uses technology similar to that found in smartphones to alert wearers to obstacles in their path. He conceived of the product in 2011 and has made great strides since then, obtaining two patents and receiving federal grants totaling $700,000. In August, the device will undergo human trials, the first step in what Foshee hopes will be its journey to the global market.

“The ultimate goal is for the device to be prescribed to patients by physicians and covered by health insurance and Medicare,” Foshee said.

Fauxsee recently received a one-year grant in the amount of $226,000 from the National Eye Institute. It is the first south Arkansas company “south of Little Rock” to be awarded a Small Business Innovation research grant from a federal agency. Roboglasses are the company’s first project, though Foshee said he is working on other devices to help the seeing-impaired as well as the elderly. Since 2013, the company has received grants from the U.S. Department of Agriculture and the National Science Foundation, and $20,000 awarded by the Arkansas Economic Development Commission.

The grant from the USDA, Foshee said, allowed the initial development of the technology that goes into the glasses.

The product complements a cane and guide dog in helping the blind wearer maneuver through everyday situations. “Similar to fingertips, the sensors built into the frames ‘tap’ the wearer to alert them to walls or persons in their path of travel,” Foshee said. “The glasses have indoor and outdoor modes, and resemble Oakley wraparound shades. You don’t see any of the electronics in them.”

Each side, or stem, is independent and will alert the wearer to obstacles on either side. “If you’re walking down a hall and there is someone standing left of center, you’ll feel a tap on that side, and you will know to walk around to the right,” Foshee said. “It also gives an idea of how big the object is, providing non-intrusive information you need to prevent a head injury.”

The blind “have a high frequency of face and upper-body injuries,” Foshee said. “Forty-six percent experience these injuries once a month. Twenty-three percent have to seek medical attention. By using only a cane, the blind are not able to detect anything higher than the waist.”

Technological advancements make it possible now for the blind “to do so much more” than sighted people often realize, Foshee said. “We are able to function better in the workplace than 15 years ago. Getting an iPhone changed my world. I feel there is such a need for the products we are developing at Fauxsee.”

Fauxsee will finish developing the glasses by March. The product will then undergo initial testing by the University of Maine. “They will give us feedback, and we can make any corrections that are necessary before the human trials take place the first week in August,” Foshee said.

He received his bachelor’s degree in history, but has relied on his own creativity and curiosity in developing his product. “It’s been a long road,” he said of the project. “I’ve always been curious about how things work and tried to find solutions to problems. I’ve had to learn about engineering and business as I’ve gone along. When you write grant proposals, there is a lot of waiting in between with your fingers crossed. The process takes years.”

Dr. Mahbub Ahmed, associate professor of engineering at SAU, is assisting Foshee with construction of the product, using 3D printers to create the plastic stems. The Arkansas Small Business and Technology Development Center at SAU has also worked with Fauxsee since 2011, and has been helpful in providing the company with meeting space, grant assistance, and other services when needed.

“Having SAU in the community has been a great asset for me,” Foshee said, noting the involvement and support of his wife, Megan, who is the simulation coordinator for SAU’s nursing department.