Investing in People: Ron Harrell rides in for a visit

Ron Harrell’s Mulerider memories are neatly represented by a tool from his days as an Engineering student at Southern State College – a slide rule.

“This was the primary mathematical tool that we students used in the 1950s,” Harrell said. “It is a valuable tool, and you were taught to take care of it. We sent men to the moon using calculations on a tool like this.”

Having worked hard to save money for tuition and books at SSC, Harrell learned he would have to purchase a slide rule to attend classes in Engineering – a $35 investment. “A young man standing in line with me for books changed his mind and offered to sell me his slide rule for half of what it cost. I learned how to use this slide rule right on this campus.” 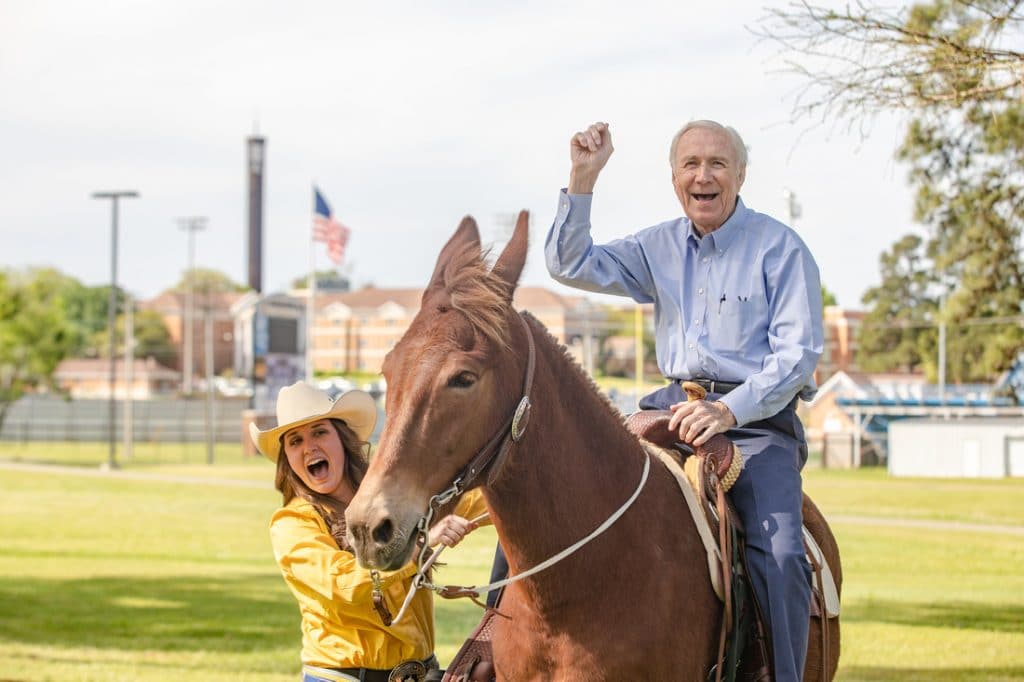 In September 2012, Harrell donated the new University mascot, Molly Ann, a registered gated mule. His involvement in raising the funds to purchase Molly Ann brought him back to SAU and to a greater commitment to the University.

“I came to know and respect many of the people here on campus and the work they do,” Harrell said. “I have always invested in people, not just in bricks and mortar.”

Harrell moved with his family to Magnolia from Junction City, Arkansas, when he finished the 10th grade. His skills in math and science caught his teachers’ attention. He was encouraged to attend SSC. “It had a reputation for affordability, and I am proud that it continues to maintain that standard today.” 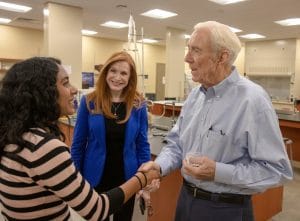 Harrell remembered that when he first became a student at SSC, many of his fellow students were veterans of the Korean Conflict. “They were 22-23 years old, and here I am 17, and they were serious! These men would set the curve. They and many of my professors encouraged me to work hard.”

His wife, the late Ann Furr Harrell, also inspired him to continue his education and follow his dreams. “She was willing to support me for two years as long as I agreed to take care of her for the rest of our marriage!” he said. “She was a wonderful woman and she gave up a lot for me.”

He and Ann had three children together and were blessed with nine grandchildren. In his family, he can see the results of a good education.

An engineering fund has been named at SAU for Mrs. Harrell. It is awarded annually to a female student by the SAU Foundation Scholarship Committee. His wife also has a memorial garden named in her honor at the SAU Alumni Center.

“The people in my life have led me and encouraged me to become the best person I could be,” Harrell said. “That started right here, at this campus.” 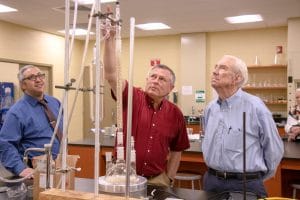 Harrell now serves as chairman emeritus for Ryder Scott, but started his tenure as a reservoir engineer, working his way up the ranks managing engineering and geological studies. Pryor to Ryder Scott, Harrell was a district petroleum engineer for McAlester Fuel Co. in Magnolia and Laurel, Mississippi, and was an engineer for Ralph E. Davis Associates, Inc. in Shreveport, Louisiana.

He worked onshore and offshore across the United States, Canada, South America, Australia, Europe, Asia, Africa, and the Middle East, and provided expert testimony before the Federal Power Commission (FPC), the Federal Energy Regulatory Commission (FERC), and for other state commissions and federal/district courts. He has delivered more than 100 presentations at national and international conferences.

Harrell has served on numerous boards and earned many professional recognitions. He was inducted into the Society of Petroleum Engineers Legion of Honor in 2007 and is a Distinguished Lecturer and recipient of numerous recognitions and awards, including the Distinguished Life Membership Award for Meritorious Service. He has also accomplished an impressive list of professional papers and publications.

PrevPreviousYep, we’ve got that too!
NextLights, Love, and Loyalty: A Campaign for Southern Arkansas UniversityNext