Yep, we’ve got that too! 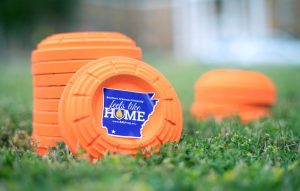 The University has begun recruiting for a new trap shooting team following the successful additions of eSports and disc golf. The interest and anticipation already surrounding the trap shooting addition promises for an exciting fall 2019 kickoff.

The team will be open to any interested SAU students and will compete in the Association of College Unions International (ACUI) Collegiate Clay Targeting Program. The sport has become increasingly popular among youth, and high school trap shooters in the region have already expressed an interest in choosing SAU to continue to compete at the next level.

The first team meeting will be held in September, and practice and competition dates are yet to be determined. Students will be able to compete at the intramural level or the collegiate competition level. Students provide their own guns, which will be stored in a secure campus location with strict procedures to be followed for check-in and check-out. The University is providing all members of the competition team with a vest.

SAU is in the fundraising phase for a trap shooting range facility to be located on the University’s Governor Ben T. Laney Farm. It will be the first facility of its kind in the state on a university campus south of Little Rock. The facility will feature a clubhouse with restrooms and storage, and three shooting ranges each consisting of five concrete lanes with high and low skeet houses. It will be home to both the University’s trap shooting team and trap shooting teams from area high schools. It will also host community, regional and state-wide shooting competitions and practices. 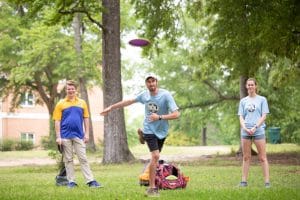 Chitwood also was a part of the SAU women’s team that won the team national championship. Her teammates were Whitney Brown, a senior Exercise Science major from Alexander, Arkansas, and Dani Hunter, a junior Elementary Education major from Pattonville, Texas.

SAU’s women’s team is the only such collegiate team in Arkansas. “That’s a big deal for our University,” Chitwood said. “It will be great for us to say, if other colleges established women’s teams, that we were the first national champions in the state.”

The men’s team performed well at Nationals also. In the championship flight, the men placed 24th out of 36 teams.

Much of the team’s success this year can be owed to the fact that SAU has a quality 18-hole disc golf course. The SAU Disc Golf Course is open to all students. Sarah Adcox, director of the Mulerider Activity Center, said disc golf is a great stress-reliever, providing students a means of getting out of their rooms and meeting other people. 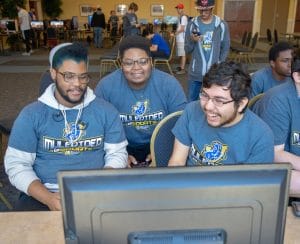 Another popular national trend that has found a home on the SAU campus is eSports. Combining the University’s affordable tuition with its computer game and animation design programs, eSports has taken off and is attracting students interested in online competitive sports. In April, campus eSports teams participated in the first Mulerider Classic, a two-day event which allowed students to compete in “Super Smash Bros Ultimate,” “Rainbow Six Siege,” and “Magic: The Gathering.”

The eSports program at SAU grew out of the Gaming Guild established in 2016. The Guild provides gamers with a community in which they can meet, hold events, and network. Kat Hartwick,

Sandra Martin, dean of housing, said SAU has answered the call for eSports. There are now eight game-specific teams under the umbrella of the Guild. Gamers at SAU participate in a variety of multiplayer games. They have access to 18 Alienware computers, 10 console stations (a mixture of Xbox, PS4 and Nintendo Switch), and four tabletop gaming stations. Gamers may utilize a small gaming lab in Honors South in the Gaming LLC. To keep up with eSports teams, follow them on Facebook at Mulerider eSports.

PrevPreviousA new direction for the SAU Alumni Association
NextInvesting in People: Ron Harrell rides in for a visitNext