SAU has expanded its residential facilities to accommodate explosive enrollment. Ready internet access is one of the amenities meeting the needs of today’s students, but campus life has changed in many other ways over the decades.

Dwight Bowlin, a former member of the SAU Alumni Association Board, graduated in 1974 with a BS in Biology. He recalls a simpler time in which technology played less of a role in students’ lives.

“We socialized more on a face-to-face basis,” Bowlin said. “All this instant communication today would have sounded like science fiction then.”

Bowlin served as a resident director in Talley Hall. “There were no fraternities, so living in a dorm was like being in a fraternal organization,” he said. “We never locked our doors.”

Talley had the kind of mystique that made everyone want in, he said. “I would say we were mischievous – or instigators!” he laughed.

Linda Harris Barnes, a 1972 graduate majoring in sociology, agreed that life on campus in those days was drastically different. “So much has changed,” she said. “I am blown away by the new facilities.”

She is impressed the way new residence halls emphasize privacy. “We shared a community bathroom that served the whole wing and you just had to manage your time to shower at a decent hour. Today there are private bathrooms with doors that lock!”

Barnes said kitchen and tutoring areas as well as access to computers are some of the helpful improvements. She remembers a “mini-kitchen” on each dorm floor and no tutoring area.

Students coming to SAU now are conditioned to technology. “I think about going to the library when I was a student. To do research, you had to pull volumes down from the shelves. Students today don’t know what that is! It is so important that we provide these technological tools.”

Bowlin remarked that technology has made it less difficult to be sociable. “If you wanted to see a girl, you had to go to Harrod Hall, check in and wait, and they would eventually send someone up to say, ‘Hey, there’s someone here who wants to see you,” he remembered. “We only had pay phones, so there was practically no communication. You’d see someone you wanted to date and it would take weeks to figure out her name.”

He served on the Alumni Board over 18 years and was involved in the development of the new residence halls on the north end of campus. “We knew that if we didn’t have a place for incoming students to stay, they would choose to go elsewhere,” he said of the decision to create Arkansas, Columbia and Magnolia halls.

Living arrangements on campus today are more luxurious than in the early 1970s. “We were not allowed microwave ovens or refrigerators,” he said. “We were not wired for technology.”

However, improved electronic communications might mean less interpersonal communication. “People are hungry to know other people,” Bowlin said. “I remember joining every club I could just to meet people.”

Barnes stressed the importance of residing on campus. “The dormitories transitioned us from living in a family environment to living on our own,” she said. “They taught us responsibility.”

Living on campus made it easier for students to get to classes or work. “I felt more a part of the campus. I got involved in the Student Senate, the College Activity Board, and dorm leadership,” Barnes reflected.

Since 2016, SAU has constructed 530 new bed spaces to meet explosive demand. Columbia and Magnolia halls opened in 2016; Burns-Harsh and Eichenberger halls followed in 2017, and Arkansas Hall opened in fall 2019. The University also added 75 new beds by acquiring the Mulerider Pointe apartments in 2018. There are 1,983 students living on campus this year, the highest number in SAU’s history. The campus boasts 18 residential facilities, only two of which are not coed. Talbot is for men only and Bussey is women-only.

Many living facilities at SAU are home to Living Learning Communities (LLC). Bussey, for example, is the Health and Fitness LLC, while Burns-Harsh (which houses beginning freshmen) is the Leadership College LLC. This allows students with similar interests to be more comfortable living on campus.

“In the past, a dorm was a place to sleep,” Martin said. “Today we offer activities aimed at educating students. They’re able to build relationships, familiarize themselves with the campus, and engage more easily in what’s going on.”

Residential halls are fully wired for the Internet and offer classroom space for such classes as Freshman Seminar. They even contain kitchen areas so that students can learn basic life skills.

“We try to teach basic independent living,” Martin said. “We tell parents that we hold students’ hands as they transition from home to the real world.”

“Parents want their children to be comfortable,” Martin said. “They want to know they have access to quality facilities. We try to create a feeling of home.”

Older buildings such as Bussey, Talbot and Talley have been remodeled over the years to offer students a better experience at a lower cost.

“I realize how much the support of the faculty and staff at SAU helped me develop the skills needed in life and career,” Barnes said. “I owe so much to Southern Arkansas University.” 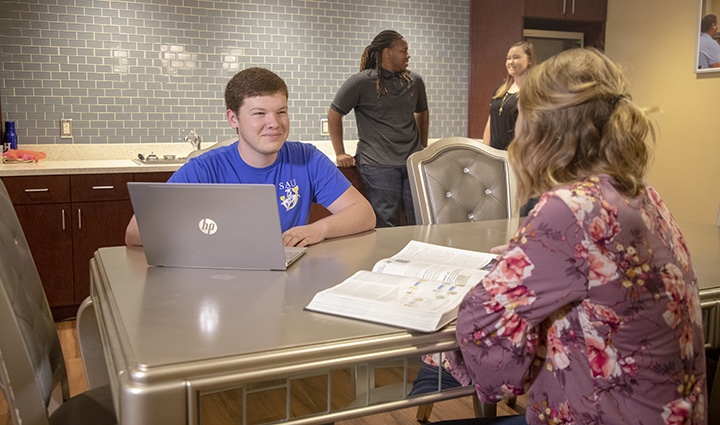 Students in an SAU residence hall. 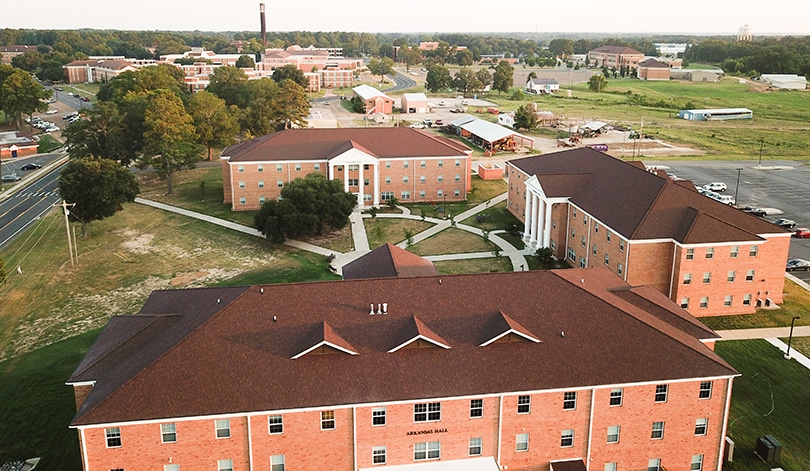