Golf, weddings, kids, karaoke, beaches, water skiing, and Bourbon Street are some of the precious memories a tight-knit group of SAU alumni have built together over the decades.

The annual gathering, known as Campout, is a ritual for as many as 10 couples, all but three of whom were sweethearts at SAU. The couples have 16 children and 10 grandchildren and have been married on average 35 years. They have attended weddings and funerals and shared millions of memories. The common thread for all is SAU and the state of Arkansas.

“We have been very blessed by our Campout group and the great bond between us,” said Steve White, who was part of the original group of Sigma Pi fraternity brothers who started the annual outing in 1980 at Lake Greeson.

After graduating, White and four friends decided to “do their own thing” separate from the fraternity. “We invited several other friends to join us,” he said. “We had begun playing golf and we wanted to be able to play during our outing.”

To work in golfing, the group decided to camp at Lake DeGray in 1981. “We would camp Friday through Sunday and play golf on Saturday,” White said. “We didn’t realize it would evolve into a ‘sacred’ summer weekend.”

The following year, 10 couples wanted to meet in Tyler, Texas, at Lake Tyler. Again, the group would camp, cook, catch up, and play golf on Saturday. The third year, the annual Campout group gathered near Alexandria, Louisiana. “We chose sites that were central to everybody,” White said.

By the early 1980s, there were several children in attendance. “We would meet and discuss the next year’s ideas, and we voted and decided the kids were great but it was hard on the girls to enjoy the weekend with all the care the kids needed,” White said.

The group voted to always meet in Hot Springs, Arkansas, “and now stay in condos … kid free! We did this for several years,” White said.

Hot Springs gatherings included water and jet skiing as well as a golfing trophy and bragging rights. However, the group decided to expand its travel to Gulf Shores, Alabama, so the kids could get to know each other. “We stayed a little longer so we could get in all the golf, beach, shopping, and, of course, eating at great restaurants,” White said.

The group eventually returned to Hot Springs. Golf became the focal point for the guys. “We wanted that trophy!” White said. “We always had a ceremony on Saturday night to award the winner his prize.”

With “age” becoming a factor, renting a party barge was the new norm for the lake. “The girls were really good about letting us have our fun,” White said.

In addition to Hot Springs, the group gathered annually in Heber Springs, Eureka Springs and Perdido Key, Florida. “Hot Springs was still home base between the big trips,” White said.

In 2012, and retirement in the near future for many group members, Campout began to go to “other really nice places, more frequently,” White said. They rented an eight-bedroom chalet in Gatlinburg, Tennessee, and had fun times in the mountains and playing golf. Most members of the group were able to take an Alaskan cruise one summer, and they met the following summer in Vicksburg, Mississippi, at an historic bed-and-breakfast. “We did a big weekend in New Orleans and stayed downtown close to Bourbon Street, which included a great round of golf at the TPC Louisiana,” White said. “Recently, we went to Fort Morgan, Alabama, and stayed at The Beach Club Resort, which has a great golf course.”

Last summer, the group returned to Hot Springs. “Everyone came, and we even had one of our first-year attendees come back after 38 years,” White said. “We missed him and we reminisced about our SAU days.”

Great memories include their kids all getting to know each other, karaoke in Eureka Springs (singing “Soul Man” like some members did in the SAU Talent Show) and attending Ashley White’s wedding in 2015.

“The SAU memories are precious to us all, especially as they get bigger and better each year,” White said.

As for the 40thCampout? The group is planning to gather in Colorado and New Mexico for cool temperatures, majestic scenery, plenty of golf and shopping … no kids allowed. 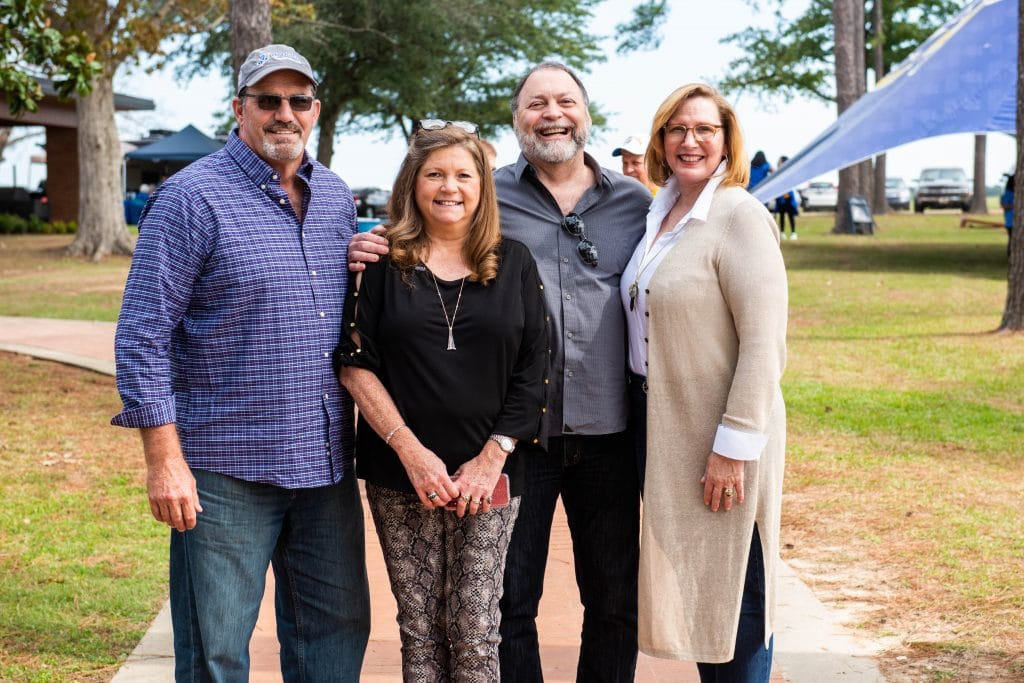