A 2005 graduate of Southern Arkansas University is putting his education to the test for the State of Arkansas during the worldwide pandemic.

Grant Smith, Software Lead Engineer for the Department of Information Systems, is helping meet the Governor’s goal of moving essential services online due to the coronavirus.

He and his Windows Support Team are working around the clock to help dozens of state agencies operate remotely. 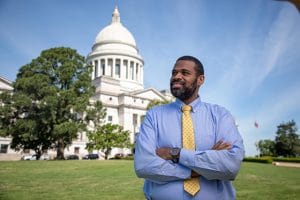 Smith earned his business degree from SAU, an education that helped prepare him for the task of giving state workers the capabilities necessary to work from home. “It’s a challenge and a change,” he said. “We are used to rolling things out physically in an emergency, but this is an emergency you can’t see.”

The El Dorado native continued in his older brother’s footsteps by choosing SAU as his college home. “Most people think of SAU as an agricultural school, but it is so much more than that. The amount of knowledge and talent coming out of SAU is phenomenal.”

Smith has worked for the State of Arkansas for 15 years and responded to emergencies in the past. “This is different,” he said of the pandemic.

His first responsibility, after the Governor announced the need to move services online, was deploying laptops to workers who needed them. “Most employees have desktops, and you can’t just pick those up and move them,” he said. “We had to get the laptops to the employees.”

He and his 17-member team not only physically delivered hundreds of laptops but manage servers and answer IT questions from the Governor as well as dozens of agencies. His work impacts hundreds of employees and ensures the smooth functioning of a wide range of vital services.

“We are a 24/7 shop,” he said. “I’m always on call.” Smith still works mostly out of his office, which is near the Governor’s. “Sometimes, it’s easier for me to walk over and solve a problem,” he said.

“Without him, this process would not be happening,” Bright said. “There has never been a large scale need for employees to work remotely before. It is not an easy process. As soon as Grant and I met, we began talking and realized we were SAU graduates.”

Both were greatly influenced by John and Curtice Rankin, who owned a Magnolia restaurant while Smith was a student at SAU.

“I needed a job one summer, and they helped me by hiring me and giving me as many hours as I could handle,” Smith said. “Curt let me work on his PC in my free time. That computer was my learning and testing device. The Rankins were instrumental in my education, and I want to thank them.”

SAU provided the “ground floor” of instruction necessary for Smith to perform his job today. “Technology is now faster and more automated,” he said. “It’s wireless, and has

changed a lot since I was in college, but there is always a command line for understanding how (technology) is built and how it functions. SAU teaches you from the ground up. You’ll always take that with you. If there’s a problem, you can go under the hood and solve it.”

Smith thinks remote work will continue indefinitely and that more services will transition online. “We have to increase our ability to deploy on a mass scale. We were able to roll out within a week, but we may need to expedite that in the future. How do we do that? We can support a thousand people today, but will we need to support 2,000 tomorrow? These are questions we’re already asking. What is the new normal?”

For the foreseeable future, this Mulerider’s knowledge and skills will be tested as he continues the vital work of supporting essential state functions.

PrevPreviousFrom the President: A Time for Heroes
NextZachary Shealy ’18: On the front lines in healthcareNext