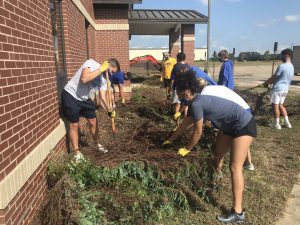 Following the Great American Conference’s August 14 announcement to suspend all fall and winter sports through December 31, the typical day-to-day, in-season operations of the SAU Athletic Department and its 14 NCAA-sponsored athletic programs changed drastically. With ten of the department’s programs seeing its fall sports competition shelved through the remainder of the year, Mulerider student-athletes focused on winning off the court specifically in the area of community service through the department-led program “Muleriders in Magnolia.”

While the “Muleriders in Magnolia” (MIM) program is certainly not new to the Mulerider Athletics department, as the program received the NCAA’s Division II Award of Excellence for Community Engagement in 2013, the group’s involvement on campus and around Magnolia during the fall semester was as impactful as it has ever been.

“Muleriders in Magnolia has been extremely beneficial for our student-athletes,” remarked Mulerider Men’s Basketball Assistant Coach and MIM Coordinator Logan Quinn who witnessed over 300 SAU student-athletes log over 600 hours of community service during the fall semester alone. “Magnolia does so much for SAU, and we hope to give back to our community in a way that makes Magnolia proud.”

In the fall semester alone, MIM’s visibility on the Southern Arkansas campus was tremendous. The group aided the SAU Physical Plant in several areas including the beautification of flower beds around campus as well as with the washing of the SAU bus fleet. They teamed up with Bodcaw Bank to help clean up the property line between the bank’s newest location and the SAU President’s Home.

The group also assisted the on-campus Mulerider Market by sorting through old and expired canned goods and helping organize the many items that are offered. MIM also took the time to handwrite “thank you” cards to financial donors of SAU. 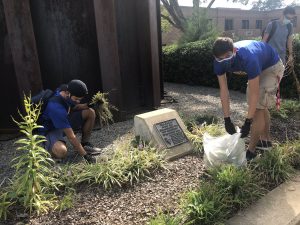 Within the Magnolia community, the program had a profound impact as it engaged in numerous community service projects from mid-August through early November when the semester ended. MIM helped out the Central Arkansas Development Center at the Magnolia Fairgrounds by passing out boxes of food to families in need. They also assisted with some landscaping around the new city police station that will soon be located inside the Harvey Couch Business Park. Additionally, MIM helped with the hanging of Christmas lights at the Cecil Wilson Garden located just off the Magnolia square. 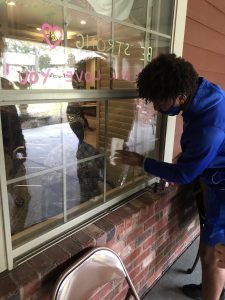 Interaction with individuals young and old within the community was difficult considering the public health crisis, but that didn’t deter the group from finding ways to interact. MIM spent quality time with the residents at the Greenhouse Cottages of Wentworth as they wrote encouraging words and played games with window paint. They spent several mornings virtually greeting students from Eastside Elementary as they were being dropped off for school, and several student-athletes appeared in a video sponsored by the Magnolia Rotary Club to encourage local elementary students.

“My hope for each student-athlete is that throughout the year they can realize the importance of giving their time and effort to people,” Quinn acknowledged. “It is a real credit to these student-athletes who are willing to give their time back to the community. It has been difficult with COVID-19 to be out and about like we normally are, but we will continue to find ways to give back!”