SAU ‘Feels Like Home’ for these future farmers of America 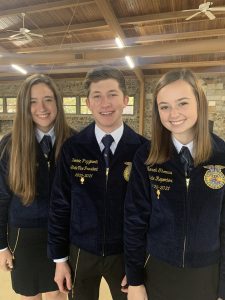 Three of Arkansas’ 2020-2021 state FFA officers are making Southern Arkansas University their home for pursuing their passion in agriculture. The freshmen all come from different backgrounds and found FFA in different ways, but each developed a passion for the organization and the agriculture industry.

Sarah Thomas, from Concord, Arkansas, is serving as reporter but admits she did not have an agriculture background before FFA. “I was required to take an agriculture class at my high school,” Thomas explained. “I did that and ended up showing a pig at the fair and absolutely fell in love with it!”
Thomas immediately got involved in FFA and continued showing pigs throughout high school. She knew she wanted to pursue agriculture in college and applied to SAU in the tenth grade because of guidance from her FFA chapter advisor. “I obviously had to wait to finish high school,” she said, “but I knew then SAU is where I would go to college. It really does feel like home.”

Dominic Pizzimenti, from Mountain Home, Arkansas is serving as Eastern District Vice President but was undecided on his choice for college for quite some time. “I was considering SAU and another in-state school,” Pizzimenti said, “but SAU was more welcoming and I had more of a personal connection here, and that really made it feel like home.”

Pizzimenti’s grandfather showed cattle but his parents weren’t involved the agriculture industry. Taking his first agriculture class in eight grade introduced him to the world of showing animals.

”I began showing goats and attended FFA national convention and that hooked me,” he said. “I’ve shown every species of animal you can show. I’m really drawn to the livestock showing.”

Kyleen Hewitt is from Fouke, Arkansas and is serving as Southern District Vice President and had a more logical path to SAU. “My family owns a cattle ranch which my great grandfather started, so it’s been in my family for several generations,” she explained. “I joined FFA and showed cattle all through high school. Plus SAU is just an hour away from my home and my mom is an alum, so it was a logical choice for me.” 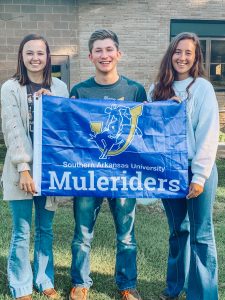 Of the six state officers, whose terms end in April, three chose SAU, two are attending the University of Arkansas at Fayetteville and one is at Arkansas Tech University.

The officers are sure to be assets for recruiting the next class, as well. “There are nearly 16,000 FFA students across Arkansas,” said Pizzimenti, “and when they start looking at college, we can really impact them and encourage them to attend SAU because of the great experience we are having here. We have connections with other state officers and members from other state organizations, too, so we can influence students outside of the state.”

“It’s very humbling,” added Thomas, “to be involved in this industry, which allows all other industries to exist. Without agriculture, we wouldn’t have anything else.”

The trio also noted how hands-on the agriculture classes are at SAU, especially the Farm Experience class which allows students to learn and reinforce life skills like looking at fencing and handling the cattle.
“I think this is another advantage of attending a smaller school,” said Sarah. “I have friends at other schools who had all of their classes online, but I’m so glad we were able to continue some in-person classes to gain this experience.”

While each of these students came to FFA via different paths, they all have obviously developed similar passions for the organization and the industry and each wants to use their FFA experiences and the degree they earn from SAU to help farmers and ranchers continue to do their jobs.