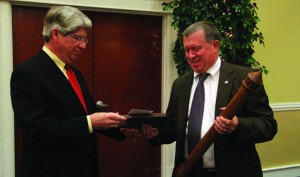 Dr. David Ashby, professor of economics and finance, was named the 2012 Honor Professor during the annual Southern Arkansas University Faculty Honors Banquet recently. Other awards were given to faculty members for teaching and service.

For years, Ashby worked as an accountant by day and served as an adjunct professor teaching mostly accounting classes at night at the University of the Ozarks in Fort Smith.

“One year, the finance professor didn’t show up and I got to teach the basic financial management course,” he said. “After teaching that course, I knew what I wanted to do.”

His favorite part of teaching is seeing the moment of understanding in his students.

“Seeing somebody finally ‘get it’ – whether that means getting a particular concept in the narrow sense, or ‘getting’ why a career as a financial planner could improve a lot of lives and would be a great way to spend your working years,” said Ashby. “I also get to work with a fabulous group of faculty, who truly care about students and their success.” 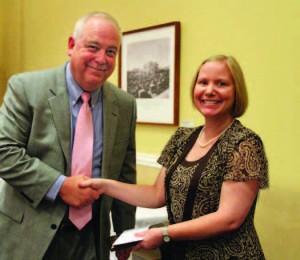 “Dr. Ashby is an outstanding professor and has distinguished himself through his teaching, scholarship, and leadership of the CFP program both here in Arkansas and nationally,” said SAU President Dr. David Rankin. “In addition, he has put his expertise to work by founding the very successful investment advisory firm Mustard Seed Financial, Inc.”

Ashby has a motto that he frequently shares with his students: “To whom much is given, much is required. Use the talents you have been given wisely.”

Talk to former students and it would be a sure bet that you wouldn’t find one with negative things to say. He is endeared by those who know him.

“I think it is because he is always willing to help students and faculty alike with any problem, and I think that has won him a whole host of friends both here at the University and beyond,” said Rankin. “He is easily one of the most outstanding finance professors anywhere.”

Logan was honored as the recipient of the Research Award. She has published four peer-reviewed journal articles in the past four years and has recently published a textbook titled “Principles of Macroeconomics: A Simple Manual to the Not-so-dismal Science.”

Hayes was honored as the recipient of the Auburn Smith Service Award.

“The nomination letters describe students who gain confidence, protection, and guidance while at SAU thanks to this professor,” said Dr. Shannin Schroeder when presenting the award to Hayes. “They note with pride that academic improvement is on this person’s radar and a consistent goal for students. They describe physically and emotionally trying times for their program – and how they watched firsthand as a role model, who’d been more a parent than a coach at time, channeled that frustration and their fears into determination to right a terrible wrong.”

DeSerguirant was honored with the Robert Walz Teaching Award. In presenting the award, Dr. Terrye Stinson said DeSerguirant had “used everything in his considerable repertoire of experience for the betterment of his program.” Under his direction, the program has grown in enrollment, increased the number of scholarships, and has

made possible new opportunities for his students. Stinson said that DeSerguirant’s students say that his in-class conduct is among the best they have experienced. 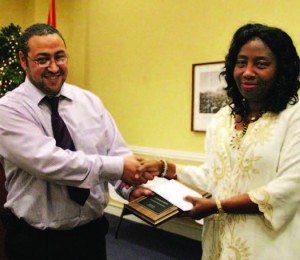 Boumtje was awarded the Calvin Wetzig Teaching Award. The award was presented by Dr. Abdel Bachri who noted that Boumtje taught a very difficult subject – French – but she receives some of the highest student evaluations. “Learning a foreign language is hard, but you couldn’t have picked a better person to teach it,” wrote one student.