James Freeman appointed to SAU Board 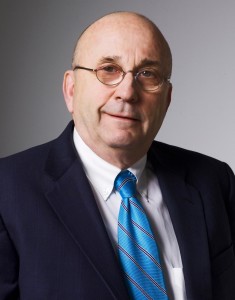 Southern Arkansas University alum and Dillard’s CFO James I. Freeman of Texarkana has been appointed to the SAU Board of Trustees.

Freeman has replaced Ken Sibley on the SAU Board, with an appointment to expire January 14, 2015. This was one of 18 appointments made by Governor Mike Beebe on Tuesday, May 27, 2014. Freeman participated in his first SAU Board meeting at a June 11 conference call.

“I am very pleased that the Governor has appointed James Freeman to the Southern Arkansas University Board of Trustees,” said SAU President Dr. David Rankin. “Mr. Freeman has achieved outstanding success in both accounting and finance and has been very supportive of the University.”

Freeman is executive vice president and CFO of Dillard’s Inc. He received the bachelor of business administration degree from SAU (then Southern State College) in 1971.

“I am excited about the opportunity to serve the University,” said Freeman.

He received a Certificate of Distinction for earning the highest grade in the state on the CPA exam in 1971. He credits SAU in preparing him for the CPA exam and his successful career.

“The accounting curriculum was very strong. Dr. Rankin taught us corporate finance and Louis Blanchard was head of accounting and had quite a track record as several of us scored top scores on the exam,” said Freeman.

Freeman has certainly demonstrated his appreciation of his alma mater over the years. He is a member of the Mulerider Society, which means he has cumulative contributions to SAU surpassing $500,000. He has endowed two professorships in the SAU College of Business, and has served on the SAU Foundation Board of Governors since 2012.

“Knowing his busy schedule, we are grateful for his willingness to devote time to the Foundation’s mission of raising and managing funds on behalf of the University,” said Jeanie Bismark, director of the SAU Foundation.

In 1978, he joined BKD LLP – one of the nation’s largest accounting firms – as the youngest partner in the firm’s history. He became the partner in charge of the firm’s Little Rock office in 1982. He joined Dillard’s in 1988 as chief financial officer and was elected to the Dillard’s Board of Directors in 1990. He joined the Board’s Executive Committee in 1995. He is the second longest serving CFO of a Fortune 500 company.

Freeman has served on the Dean’s Advisory Board for the Sam M. Walton College of Business at the University of Arkansas. He is also a former chairman of the Financial Executive Council of the National Retail Foundation as well as a board member for several charity organizations in central Arkansas.