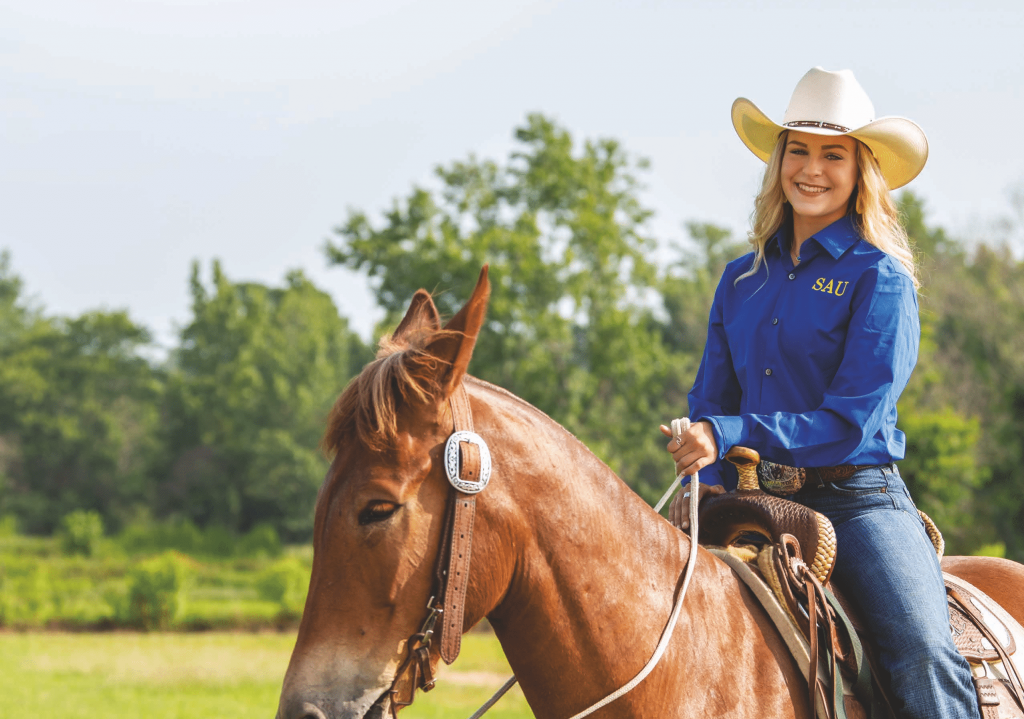 Malli Dooly of Emerson carries the flag of a cherished tradition at Southern Arkansas University as the new official Mulerider Mascot. The freshman animal science major has long been affiliated with SAU through her high school extra-curricular activities, and now serves as a Mulerider advocate, spreading the word about her university home with the help of Molly Ann, SAU’s beloved mule.

“One of my absolute favorite parts of getting to serve as our mascot has been the people I have met,” Dooly enthused. “People love taking pictures with Molly Ann, she is so unique. I enjoy meeting the people who love celebrating Molly Ann as much as I do and hearing stories about their time at SAU.”

The Emerson High School graduate participated in 4-H for 14 years, serving as a Teen Star and Arkansas 4-H Ambassador. She was in FFA for six years, serving as Arkansas FFA State Secretary and was also involved in Science Club, Beta Club, Youth Advisory Council, Student Council, and FBLA. She has shown livestock since ninth grade.

“Being involved in so many clubs and organizations throughout high school, I got to work with SAU on many occasions,” Dooly said. “I knew I wanted to major in agriculture and fell in love with the Ag department and how it is committed to seeing successful students. I am also involved in the Collegiate FFA and Ag Club.”

As the previous Mulerider, Abbie Guin, was preparing last year to graduate, Dooly received an email last year as Abbie Guin, SAU’s previous Mulerider, was preparing to graduate. “I had talked
myself out of filling out the application,” she said, “but a couple of friends encouraged me, so I called my parents to ask their opinion and decided to apply.”

She gained a spot for an interview. “I got the call a few days later in which Coach Rusty Hayes told me I was going to be our next Mulerider, and I was ecstatic to say yes!”

Having grown up in Mulerider country, Dooly was excited to show her school spirit. “Being the Mulerider gives me an outlet to share my love for SAU, what we stand for, and to recruit some future Muleriders,” she said. “As the mascot, I ride down the end zone at football games anytime our team scores. Beyond that, I get to carry the SAU flag at other events such as the home rodeo. Molly Ann has been in several parades, rodeos, events, and she even visited Grind City Media in Memphis.”

Dooly looks forward to representing the Muleriders through these activities as she proudly fulfills one of SAU’s most vital roles.